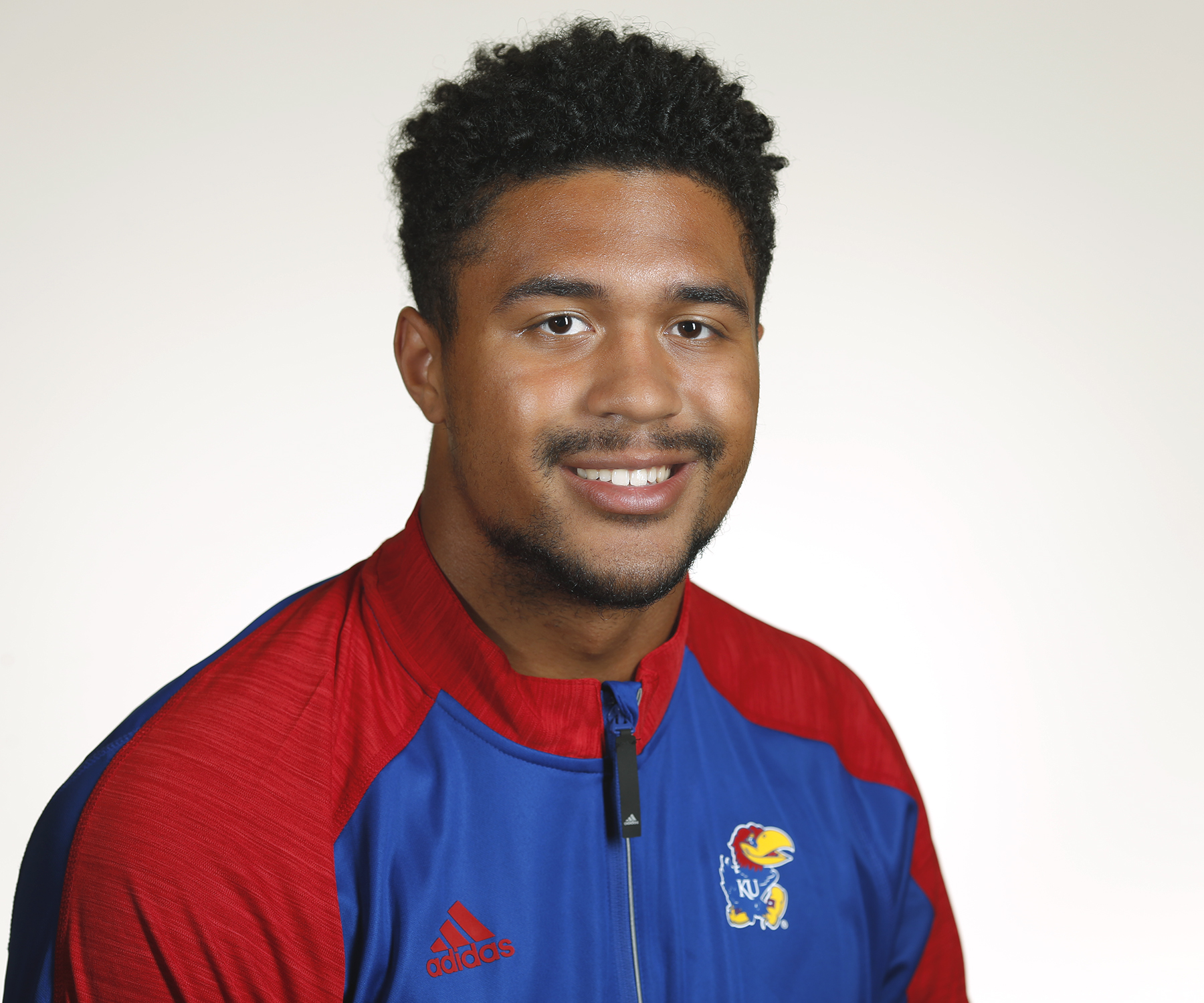 Career Summary: Played in 22 games… Made starts in six contests… Credited with 37 tackles… Made 8.0 tackles behind the line-of-scrimmage… Registered 2.5 sacks… Hurried the quarterback three times.

2016 (Sr.): Played in 10 games before missing the remainder of the season with an injury… Started two contests… Provided 14 tackles… Collected 4.0 tackles-for-loss… Produced 1.0 sack… Rhode Island: Started at defensive end to begin his senior season, and made a tackle in KU’s win… Ohio: Picked up his second-straight start and provided two tackles – one for loss… at Memphis: Assisted on one stop… at Texas Tech: Contributed one tackle… TCU: Saw action at defensive end, but did not record any statistics… at Baylor: Contributed two tackles, one for loss, against the Bears… Oklahoma State: Tallied a sack for his only statistical output of the contest… at Oklahoma: Notched three tackles, one behind the line-of-scrimmage, against the Sooners… at West Virginia: Posted one tackle against the Mountaineers… Iowa State: Collected two tackles against the Cyclones… Texas: Missed the contest due to injury… at K-State: Missed the contest due to injury.

2015 (RJr.): Saw time in all 12 games… Started contests against Rutgers, Baylor, Texas Tech and Oklahoma State… Notched 23 tackles, 4.0 tackles for loss and 1.5 sacks… Turned in a career-high five tackles at Iowa State… Posted his first-career sack against Texas Tech… South Dakota State: Ended his first game as a Jayhawk with two tackles from his defensive end position… Memphis: Recorded one tackle… at Rutgers: Started his first-career game at defensive end, but did not record any statistics… at Iowa State: Garnered a career-high five tackles… Baylor: Started his second game and made his first-career tackle in the backfield… Texas Tech: Started, and wrapped up the first sack of his career, along with two total tackles… at Oklahoma State: Assisted on one tackle… Oklahoma: Made one tackle… at Texas: Saw time at defensive end, but did not record any statistics… at TCU: Rotated in at defensive end and made three tackles, including one for loss, while hurrying the quarterback once… West Virginia: Subbed in at defensive end, but did not record any statistics… K-State: Secured two tackles, while assisting on a sack against the Wildcats.

2012-13 (Fr.-So. at Arizona Western): Rated a three-star prospect by Rivals.com, ESPN.com and Scout.com… Tabbed the 44th-best overall junior college player and second-best weakside defensive end by JCGridiron.com… ESPN.com ranked him the 13th-best junior college defensive end in the country… Earned Arizona Community College Athletic Conference (ACCAC) First Team honors as a sophomore… Tallied 54 tackles, including 24 solo stops, in 2013… Credited with 20.0 tackles for loss and 8.0 sacks as a sophomore… Recorded 25 tackles, 7.0 tackles for loss and 4.0 sacks during his freshman season… Helped lead Arizona Western to an 8-2 overall mark and an El Toro Bowl win in 2012… Coached by Tom Minnick at AWC.

High School: Prepped at Liberty High School under head coach Steve Valach… Helped lead LHS to the playoffs in 2010, playing on both the offensive and defensive lines.