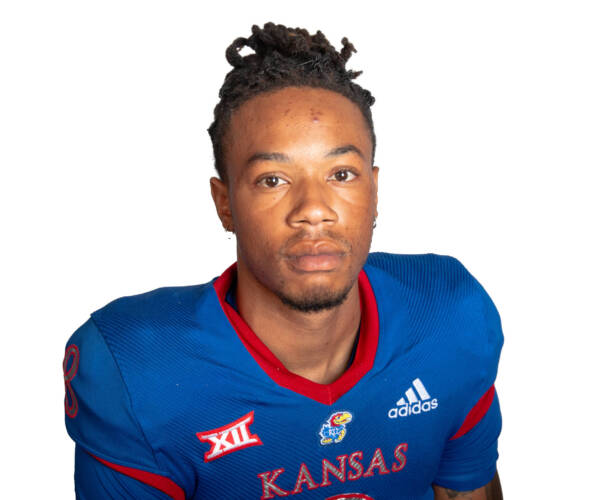 2020 (Sr.): All-Big 12 Honorable Mention (WR) … Tops among KU’s receiving corps this year with 43 receptions and 458 yards gained through the air … Those numbers were good for an average of 10.7 yards per catch, with a long reception of 48 yards … Found the end zone twice when hauling in passes, which put him in a three-way tie for the team lead in that category … On special teams, returned one kickoff for the Jayhawks, which was a gain of 19 yards. Coastal Carolina: Started the season opener at wide receiver, catching five passes for 63 yards and a touchdown … Came down with the longest catch of his career in the fourth quarter, grabbing a 37-yard reception on a Miles Kendrick throw … His previous long of 36 yards came against Texas in 2019 … In addition, he added a touchdown reception from Kendrick, also in the fourth quarter, scoring from five yards out … The touchdown was the third of his collegiate career, adding one in each of the last two seasons … at Baylor: KU’s top receiver against the Bears, making six catches and accumulating 65 yards … Oklahoma State: Caught four passes for 43 yards with a long reception of 30 yards vs. OSU, making him KU’s top receiver for the second-straight game … at West Virginia: In KU’s starting lineup at wide receiver for the third time this season against the Mountaineers, but did not record any stats … at Kansas State: Led the Jayhawk receivers in Manhattan, recording seven catches for 58 yards … Six of the senior’s catches came in the first half alone … Iowa State: Hauled in five receptions for a total of 66 yards, the most he has accumulated in a single game this season … Caught a  pass from Andrew Parchment for the team’s second two-point conversion completed this season, with the previous successful two-point conversation coming against Coastal Carolina in the season opener … at Oklahoma: One of three team captains for the Jayhawks in Norman … KU’s second-leading receiver against the Sooners with four receptions for 29 yards … TCU: One of KU’s four team captains for the game against the Horned Frogs … In the first quarter, the senior caught a 48-yard touchdown pass from freshman QB Jalon Daniels … That touchdown was Lassiter’s second of the season and fourth of his career … His 116 receiving yards are the most for a KU receiver this season … In addition, he is also the first KU player to have 100+ receiving yards in a game since Stephen Robinson Jr., against Texas Tech in 2019 … at Texas Tech: KU’s third team captain for the game in Lubbock … Made his eighth start of the season at WR while seeing playing time in all nine contests … Had five catches on the afternoon for a total of 18 yards through the air … On special teams, returned one kickoff for 19 yards.

2019 (Jr.): Academic All-Big 12 Second Team … Played in 11 of KU’s 12 games, earning starts in each of the final three games of the season … The team’s third-leading receiver for the year, catching 34 passes for 352 yards and one touchdown … Averaged 10.4 yards per catch, with a long reception of 36 yards … On special teams, returned four punts for 18 yards, good for an average of 4.5 yards per return, with a long return of 11 yards … Also registered four solo tackles. Indiana State: Saw action on special teams, returning one punt for 11 yards … Coastal Carolina: Returned two punts for seven yards … at Boston College: Hauled in five catches for a total of 67 yards, with a long reception of 21 yards, all new career bests … West Virginia: Recorded three catches from quarterback Carter Stanley for a total of 45 yards and one touchdown, his first of the season … at TCU: Saw playing time in Fort Worth, but did not record any statistics … Oklahoma: Had one catch on the day … at Texas: Caught five passes on the night, matching his season and career bests … Accumulated 66 yards receiving … His long reception of the night, 36 yards, set a new season and career high … Made one tackle against the Longhorns, the first of his KU career … Texas Tech: Hauled in a season and career-high eight passes for 75 total yards (also a new season and career best) in the Jayhawks’ 37-34 Homecoming victory over the Red Raiders … Kansas State: Did not play in the annual Dillons Sunflower Showdown … at Oklahoma State: Back on the gridiron in Stillwater for KU, catching five passes for a total of 35 yards, with a long reception of 20 yards … at Iowa State: Made his second-straight start of the season at wide receiver for the Jayhawks in Ames … Hauled in five receptions from quarterback Carter Stanley for a total of 61 yards on the afternoon, with a long catch of 31 yards … Baylor: In his third start of the year, recorded two catches for a total of eight yards on offense … Also returned one punt on the afternoon … Made a season and career-high two solo tackles against the nationally ranked Bears.

2018 (So.): Hauled in 12 passes for 87 yards and a touchdown … Served as KU’s primary punt returner, averaging 5.6 yards per return … Registered 14 returns for 79 yards, with a long of 21 yards … Nicholls: Recorded 26 yards on two punt returns … at Central Michigan: Caught three passes for five yards and returned three punts for 24 yards … Rutgers: Returned one punt for 12 yards … Oklahoma State: Caught his first-career touchdown as a Jayhawk for 20 yards … at Texas Tech: Caught four balls for 41 yards.

2017 (RFr.): Played in five games … Saw action against SEMO, Central Michigan, Texas, Oklahoma and Oklahoma State … Oklahoma: Had one rushing attempt but it resulted in a loss of six yards.

Personal: Son of Ericka and the late Kwamie Lassiter … Father, Kwamie, played at KU from 1992-94, helping lead the Jayhawks to a win in the 1992 Aloha Bowl … Lassiter played in the NFL for the Arizona Cardinals (1995–2002), San Diego Chargers (2003) and St. Louis Rams (2004) … Has five brothers: Eric, KaVon, Darius, Kwinton and Kwincy … Also has two sisters: Devon and Darian … Majoring in liberal arts and sciences.