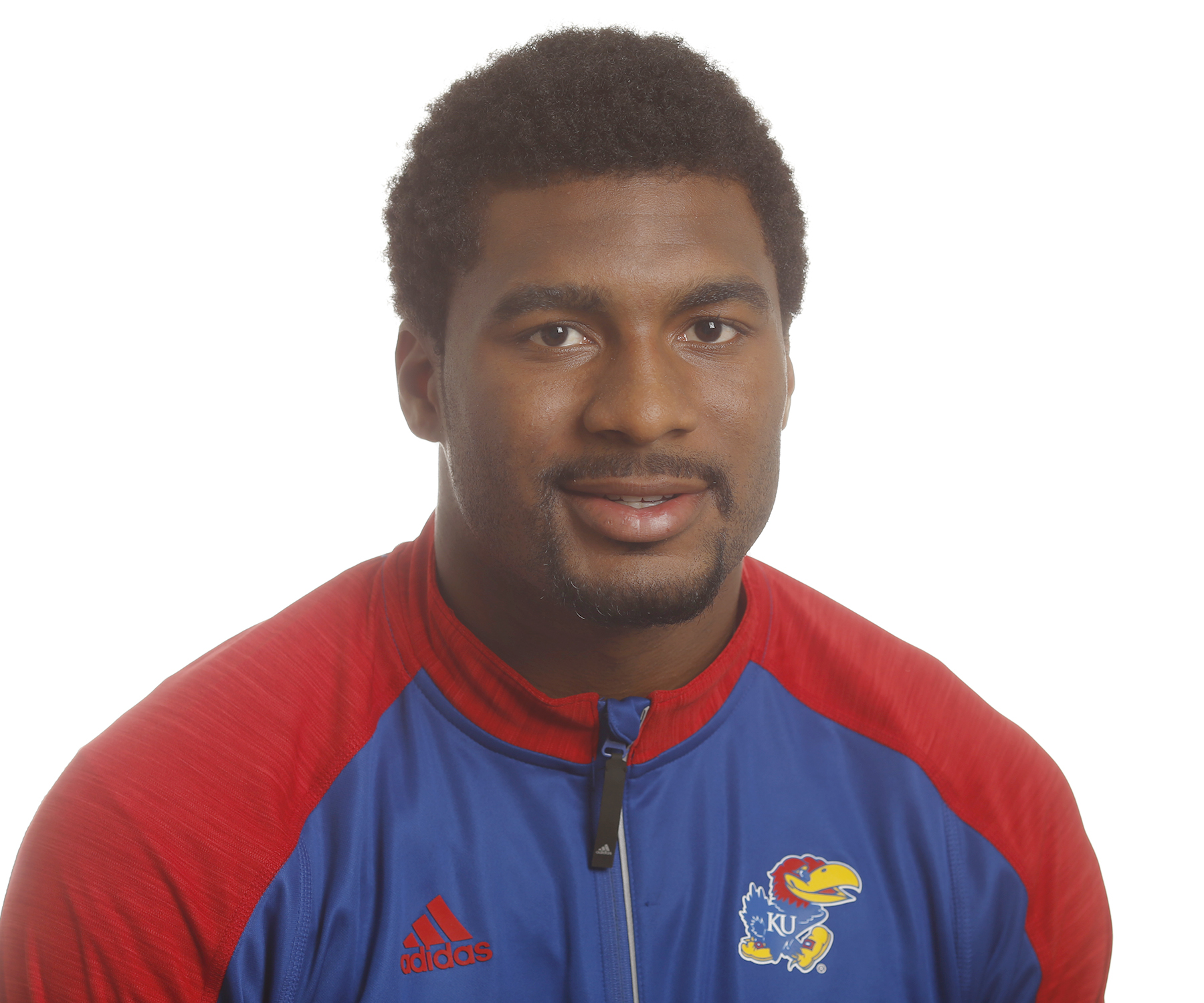 Career Summary: Played in 45 games… Started at linebacker in 33 contests… Gathered 185 tackles… Credited with 15.0 tackles-for-loss… Collected 3.0 sacks… Intercepted one pass and returned it 83 yards for a score… Disrupted 10 passes… Forced one fumble… Recovered one fumble… Hurried the quarterback twice.

2015 (Jr.): Played in all 12 contests, only missing a start at Rutgers due to injury… KU’s third-leading tackler with 71 stops… Made 3.5 tackles-for-loss and had one sack… Returned an interception 83 yards for a touchdown against Iowa State… Recovered two fumbles… Posted a career-best 12 tackles, 1.5 for loss, against TCU… South Dakota State: Debuted at Kansas with a start at middle linebacker, while recording a team-second best seven tackles… Memphis: Had nine tackles and a forced fumble… at Rutgers: Did not start due to injury, but subbed in to make five tackles… at Iowa State: Notched six tackles, a sack and an 83-yard interception return for a score… Baylor: Contributed a five-tackle performance… Texas Tech: Nearly eclipsed his previous career high in tackles, coming just one stop short, after an eight-tackle game… at Oklahoma State: Gathered five tackles… Oklahoma: Made two tackles… at Texas: Made one tackle, recovered a fumble and hurried the quarterback… at TCU: Turned in a career day after a game-high 12 tackles, including 1.5 stops behind the line of scrimmage, and a quarterback hurry… West Virginia: Completed the game with the second-most tackles in the contest, logging seven stops, against the Mountaineers… K-State: Logged four tackles, one of which was for loss, and a pass breakup.

2014 (So. at South Carolina): Saw action in all 13 games, starting six at Mike linebacker… Finished the season with 31 total tackles, including 15 solo stops… Credited with two pass breakups, one quarterback hurry and 1.5 tackles-for-loss… Tallied a season-high six tackles against both Auburn and Tennessee… Recognized as the co-Everyday Attitude award winner for the defense in the spring.

2013 (R-Fr. at South Carolina): Split time at the Will linebacker position… Played in all 13 games, starting each of the first eight contests plus the bowl game… Ranked fifth on the team with 48 tackles… Had 3.5 tackles-for-loss and 1.5 sacks… Logged five tackles in his first career start against North Carolina… Had six tackles including 2.0 tackles-for-loss and a sack at Georgia… Tied for the team lead with seven tackles against Vanderbilt… Credited with a half sack and forced a fumble at UCF.

2012 (Redshirt at South Carolina): Sat out the entire season while rehabbing from a knee injury… Was not part of the 105 at the start of fall camp… Gained his second medical redshirt.

2011 (Redshirt at South Carolina): Missed the entire season after undergoing shoulder surgery in the summer… Was not part of the 105 that started camp in August… Granted a medical redshirt.

High School: Logged 86 tackles with six sacks in his senior campaign at McEachern High School in Powder Springs, Georgia graduating in 2011… Played mostly outside linebacker, but also was used as a strong safety and inside linebacker… Coached by Kyle Hockman… Helped the Indians win 21 games over his final two seasons… Rated as the 22nd-best outside linebacker prospect in the country, the 26th-best prospect in the state of Georgia and given a three-star ranking by Rivals.com… A three-star prospect and the nation’s 99th-best outside linebacker, according to Scout.com… A three-star prospect by 247Sports.com… Named to PrepStar’s All-Southeast Region class… Also had offers from Cincinnati, Purdue, Illinois, Mississippi State, South Florida, UCF, Virginia, West Virginia and others… Played prep basketball and helped his team to the state AAAAA quarterfinals as a junior.

Personal: Earned a bachelor’s degree from South Carolina in interdisciplinary studies in May 2015.