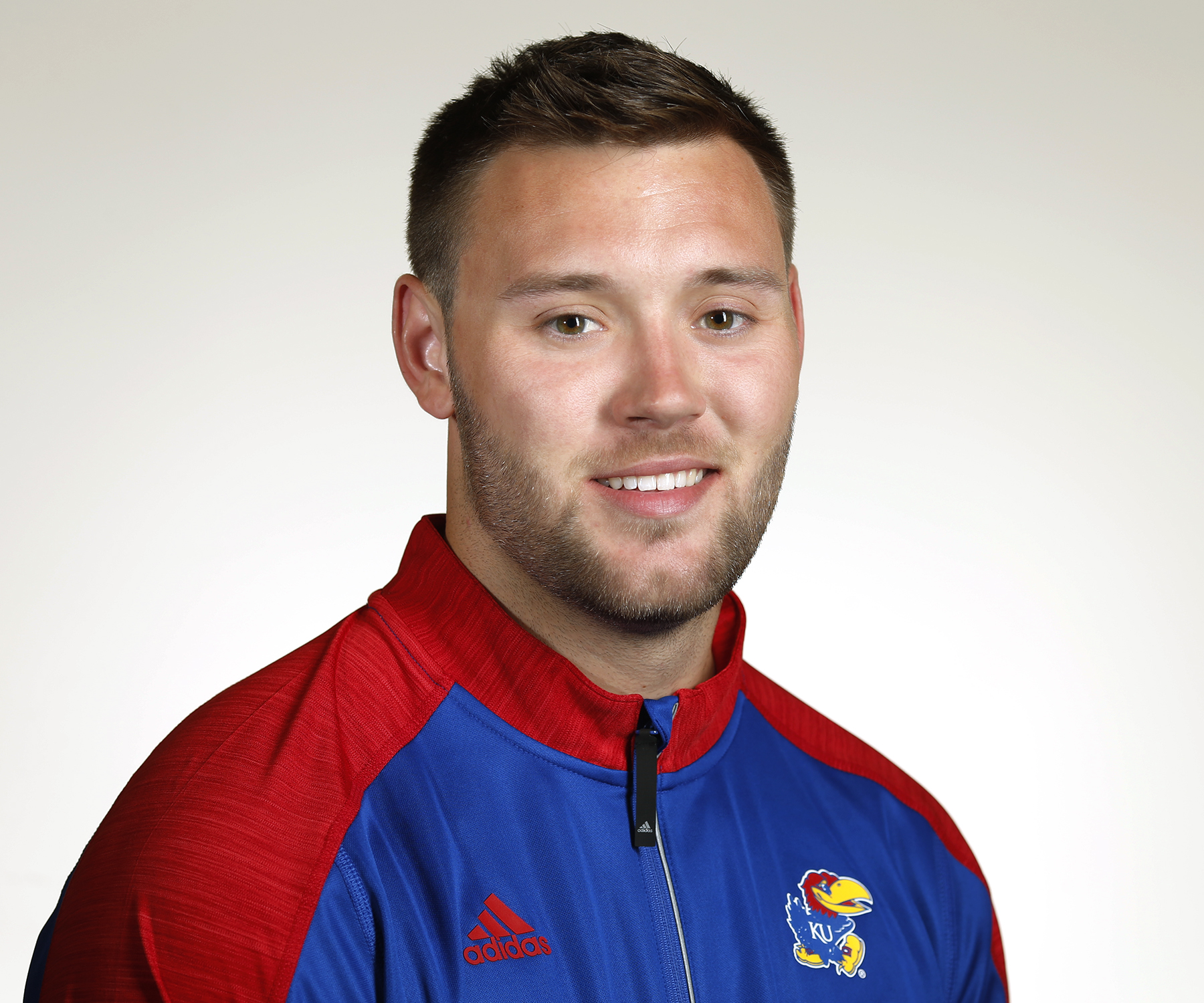 2015 (Jr.): Served as KU’s primary leg in all 12 games… Late in the season, was one of four kickers in the FBS who handled all four kicking responsibilities of punting, field goals, kickoffs and extra points… Averaged 41.5 yards-per-punt and kicked 10 inside of the 20-yard line… Had seven punts of 50 or more yards… Made 2-of-4 field goals… Kicked 20-of-43 kickoffs through the end zone… Made 4-of-5 PAT tries… South Dakota State: Entrusted with kickoff duties, booting seven balls for 450 yards and four touchbacks… Memphis: Connected on a 51-yard field goal and kicked off six times for 390 yards with five touchbacks… The 51-yard field goal was the second-longest made attempt in the Big 12 Conference through the first two weeks… Named KU’s Special Teams Player of the Week following the Memphis game… at Rutgers: Kicked off three times for 187 yards and one touchback… at Iowa State: Kicked off three times for 193 yards and one touchback… Baylor: Kicked off twice for 130 yards, including one touchback against Baylor… Texas Tech: Served as KU’s utility special teams player after attempting two field goals, kicking off four times for two touchbacks and punting for the first time in his career… Recorded three punts for 127 yards, with a long of 45, pinning one kick inside the 20-yard line against the Red Raiders… at Oklahoma State: Totaled eight punts for 345 yards and recorded the two longest punts by a Jayhawk this season after strikes of 52 and 56 yards… Oklahoma: Averaged 42.8 yards-per-punt after kicking eight times for 342 yards, with a long of 52… Also pinned the Sooners inside their own 20-yard line twice… at Texas: Punted six times for 263 yards – pinning three Longhorn drives inside their own 20-yard line… at TCU: Handled all kicking responsibilities, including field goals (1-of-1, 42 yards), kickoffs (4, 256 yards), PAT tries (2-of-2) and punts (career-high 11 attempts for 477 yards and two inside the 20-yard line)… West Virginia: Punted a career-high 12 times for 487 yards… K-State: Punted five times for 157 yards and kicked off three times for 120 yards… Also converted two PAT tries against the Wildcats.

2014 (So.): Participated in 11-of-12 games… Made 9-of-15 field goal tries for the season while connecting on 25-of-27 point after attempts… Southeast Missouri State: Connected on 2-of-4 field goals with a long of 43 yards in a victory over the Redhawks… at Duke: Scored KU’s only points with a 34-yard field goal… Central Michigan: Made 1-of-2 field goal tries, including a make from 27 yards… Texas: Did not attempt a field goal or point after try in a shutout loss… at West Virginia: Connected on two extra points… Oklahoma State: Made two field goals on three attempts, including a game-tying 35-yard try in the fourth quarter… at Texas Tech: Missed his only field goal attempt of 37 yards… at Baylor: Did not attempt any field goals, but connected on two extra points… Iowa State: Made both of his field goal attempts of 35 and 37 yards… TCU: Drilled one 23-yard field goal… at Oklahoma: Made one extra point… at K-State: Had one extra-point attempt blocked.

2013 (Fr.): Played in eight games… Served as KU’s placekicker… Connected on 5-of-10 field goals on the season… Also made 13-of-16 point after attempts (PATs)… Knocked down a career-best 52-yard field goal vs. LA Tech… South Dakota: Opened the season making his lone field goal attempt of 45 yards… Louisiana Tech: Made two of three field goals in the win over the Bulldogs, including the game-winning 52-yarder, as time expired… Named the Lou Groza Award “Star of the Week” (Sept. 23)… Texas Tech: Hit a 36-yard field goal… at TCU: Made a 37-yard attempt.
High School: Earned one letter as a kicker at Andover HS, while playing in just five games due to an injury… Also picked up two letters in soccer at AHS… Earned honorable mention all-state honors in soccer as a senior… Won a National Portfolio award in photography at Andover HS.