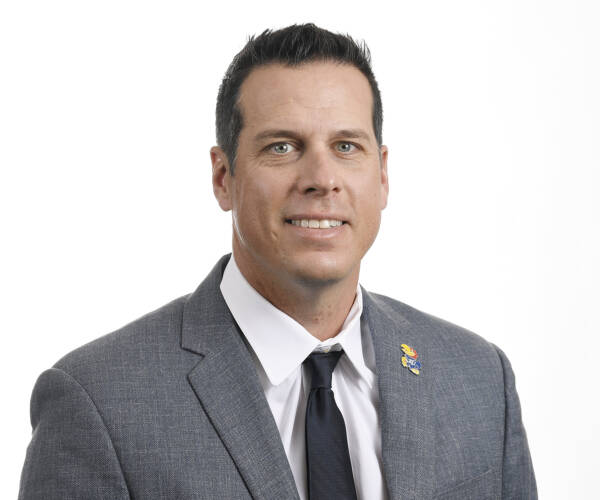 In 2020, true freshman cornerback Karon Prunty earned Freshmen All-America honors by 247Sports.com after having the most pass breakups of any true freshman in the country. Additionally, Kyron Johnson earned All-Big 12 Honorable Mention honors at outside linebacker, along with Prunty. Up front, redshirt freshman Marcus Harris totaled 7.5 tackles-for-loss, which marked the most by a Kansas freshman since 2012.

Eliot’s pedigree includes coaching stops at Florida State, Miami, Colorado and Kentucky, as well as time with proven winners and program builders Jimbo Fisher and Mark Stoops. Additionally, Eliot is among a select group of defensive thought-leaders that regularly clinic around the principles of the 3-4 defense.

Eliot came to Kansas after a successful 2017-18 season at Colorado, where he led the Buffaloes to one of the best defenses in the Pac 12. The Buffs ranked fourth in the conference in yards allowed per play (5.24), while tying for fourth with 29 sacks. Colorado also ranked third in opponent third-down conversion rate (36.36 percent) and fourth in red zone touchdowns allowed (51.6 percent).

After Colorado’s 10-win season in 2016 led by a group of seniors, the Buffaloes lost eight starters, including five players to the NFL. Eliot was tasked with rebuilding the Colorado defense in 2017.

Eliot helped develop his Colorado players to new heights. Junior linebacker Drew Lewis led the Buffaloes in tackles (94) during his junior season and junior linebacker Rick Gamboa recorded 90 tackles. Both performances were career-highs. Cornerback Isaiah Oliver was selected in the second round (58th overall) of the 2019 NFL Draft by the Atlanta Falcons.

Off the field, Eliot and the Buffaloes had a successful recruiting season, adding several highly-rated junior college prospects, including defensive lineman Mustafa Johnson, who recorded a team-high 15.5 tackles for loss and 7.5 sacks in 2018. Eliot’s recruiting efforts also brought in defensive lineman Israel Antwine over his hometown Oklahoma State Cowboys. Antwine would go on to start 11 games for CU in 2018 and teamed up with Johnson and nose tackle Javier Edwards to form a stout defensive front.

Eliot joined the Colorado staff from Kentucky, where he was the Wildcats’ defensive coordinator and linebackers coach for four seasons (2013-16). He helped coach UK to the 2016 TaxSlayer Bowl, the first postseason appearance for Kentucky since 2010. Eliot also helped Kentucky land the 22nd-ranked recruiting class in the nation, marking the first time the Wildcats assembled a Top 25 recruiting class.

At his previous two coaching stops, Kentucky and Florida State, he coached nine players who were drafted in the NFL, including three first round picks. Defensive end Josh Allen was a 2019 first-round pick of the Jacksonville Jaguars. Linebacker Bud Dupree was a 2015 first-round selection of the Pittsburgh Steelers — the first Kentucky first-rounder in 12 years — and defensive end Bjoern Werner from Florida State, who was selected by Indianapolis in 2013.

Overall at Kentucky, he coached 11 Wildcats who earned All-SEC recognition and in three of his four years with the school one of his linebackers recorded over 100 tackles in a season. Avery Williams recorded 102 stops in 2013, Josh Forrest posted 110 in 2014, a figure that ranked No. 3 in the SEC that season, while Jordan Jones had 109 in Eliot’s final year with UK.

At Kentucky, the Wildcats set a new school record for defensive touchdowns scored in a season with six in 2014; UK recorded 23 takeaways that year. UK jumped 45 places in total defense rankings from 2013 to 2014 under Eliot, finishing in the top half of the nation in that statistic. In 2015, UK ranked 28th in the FBS in passing defense by giving up only 198.1 yards per game, And in 2016, sophomore safety Mike Edwards finished the regular season leading all SEC defensive backs in tackles (93) while tying for the team lead in interceptions with three, two coming against No. 11 Louisville and Heisman Trophy winner Lamar Jackson in the Cats’ 41-38 victory.

In his second season at FSU, the Seminoles limited opponents to just 2.35 yards per carry, which led the nation. His defensive ends on the 2012 team, Werner and Cornellius Carradine, combined for and 31 tackles for losses, including 24 sacks, when FSU finished 12-2. Werner went on to be named the ACC Defensive Player of the Year on his way to earning All-America honors. Eliot also served as the interim defensive coordinator for Florida State in the 2013 Orange Bowl.

Eliot got his start in coaching at his alma mater, Wyoming, as a graduate assistant in 1999. From there he went to Houston as a graduate assistant for two years before landing in a similar position at Miami for the 2002 season; the Hurricanes went 12-0 and were ranked No. 1 at the end of the regular season before falling 31-24 in double overtime to Ohio State in the BCS National Championship Game.

Eliot lettered at linebacker at Wyoming for coach Dana Dimel and graduated with a bachelor’s degree in natural science in 1999. He earned his master’s degree in education from Houston in 2002.

He grew up in Edmond, Oklahoma, graduating from Edmond Memorial High School, where he lettered in football and basketball. He and his wife, the former Miekel Marsh, have one son, Dawson, and three daughters, Drue, Page, and Reace.