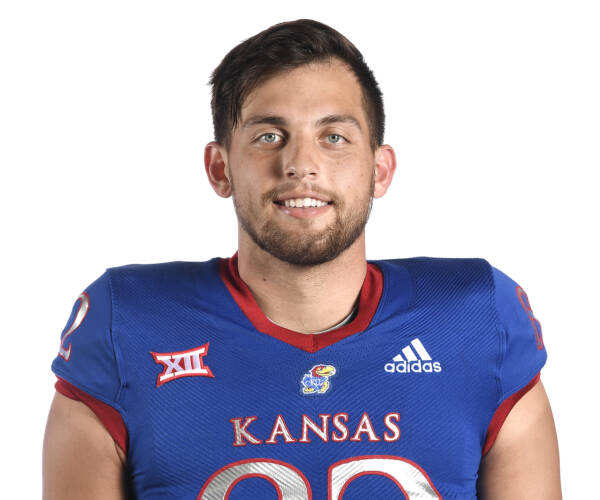 2020 (RSr.): Academic All-Big 12 Football Second Team … Saw playing time in four of KU’s nine-game season … Made one reception for a gain of 16 yards this year. Coastal Carolina: Caught a 16-yard pass in the Jayhawks’ season-opening game … at Baylor: Saw playing time against the Bears in Waco but did not record any stats … at West Virginia: Made his third appearance of the season without recording any statistics … at Oklahoma: Saw playing time against the Sooners in Norman, but did not record any statistics on the afternoon.

2019 (Sr.): Played in seven of KU’s 12 games, earning a spot in the starting lineup against TTU … In seven contests, caught seven passes for a total of 72 yards, good for an average of 10.3 yards per catch, with a long reception of 20 yards … On the year, scored one receiving touchdown. Indiana State: The tight end hauled in two receptions for 25 yards and a touchdown in the season opener … Coastal Carolina: Racked up career highs in receptions (three), receiving yards (36) and a long reception of 20 yards before being forced to leave the game early due to injury … at TCU: Returned to the field for the Jayhawks after sitting out the games at Boston College and against West Virginia due to injury … Did not record any statistics … Oklahoma: Made one catch, good for a gain of six yards, from quarterback Carter Stanley … at Texas: Did not record any stats in his playing time against the nationally ranked Longhorns, but made his fifth appearance of the season for KU at tight end … Texas Tech: Caught one pass from quarterback Carter Stanley for a gain of five yards in KU’s Homecoming victory over the Red Raiders … Kansas State: Played in the annual Dillons Sunflower Showdown, but did not record any stats in the game … at Oklahoma State: Did not play in Stillwater against the nationally ranked Cowboys.

2017 (So.): Did not see any game action … Joined the KU men’s basketball team following the season … Helped the team win its 14th-straight Big 12 Conference title and earn a trip to the 2018 Final Four.

2015 (Fr. at UMass): Redshirted his first and only season at UMass.

High School: An all-state quarterback at Hamilton HS in Chandler, Arizona … Completed 175-of-274 passes for 2,483 yards and 24 touchdowns as a senior … Also ran for 172 yards and three touchdowns … Named MVP of the Great American Rivalry Game against Brophy Prep … Played for head coach Steve Belles at HHS … Led Hamilton to the state championship game in football his senior year … Was also a standout on the basketball team at Hamilton.

Personal: Father is James Sosinski … Has an older sister, Lauren … Majoring in communications studies with a minor in psychology.