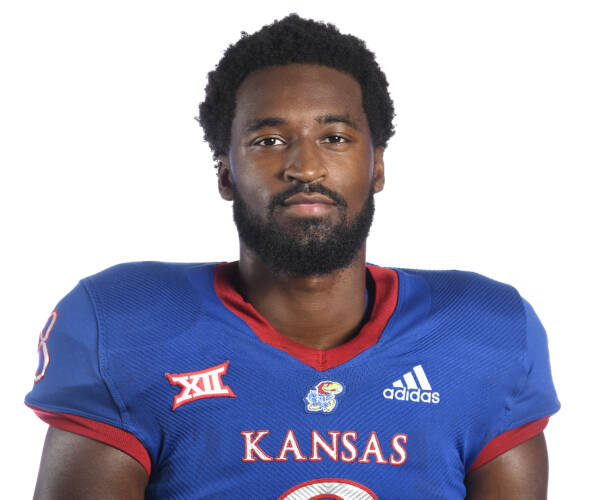 2020 (Sr.): Played in eight of KU’s nine games this season, earning a start in the season opener against CCU … Tied for 10th on the team in tackles with 25 total, (20 solo, five assisted) … Registered one TFL (for a loss of 19 yards) … Had two pass breakups and hurried the quarterback once. Coastal Carolina: Made a solo tackle and broke up a CCU pass after starting at corner in the season opener … at Baylor: Recorded four tackles and 1.0 tackle-for-loss (of 19 yards) against the Bears … at West Virginia: Credited for three tackles (two solo, one assisted) and broke up a Mountaineer pass, one of 10 KU recorded on the afternoon … at Kansas State: Contributed a solo tackle in the Dillons Sunflower Showdown … Iowa State: His five tackles against the Cyclones (three solo and two assisted) are his most in a game this season … Also credited with one quarterback hurry … at Oklahoma: Tallied three solo tackles against the Sooners while making his sixth appearance of the season for the Jayhawks … TCU: Registered another solo tackle against the Horned Frogs … at Texas Tech: Co-led the KU defense with seven total tackles on the afternoon, six of them solo … Played in eight of the Jayhawks’ nine games on the season, with a starting nod in the season opener against Coastal Carolina.

2019 (RJr.): Played in all 12 of KU’s games of the season, earning starting nods in six of them: the season opener and then the final five games of the year … Eighth among Jayhawk defenders in total tackles with 41 (35 solo, six assisted) … Included was 3.0 tackles-for-loss of seven yards … Hurried the quarterback once … Made five pass breakups on the season, which was second-most on the team. Indiana State: Started at corner in the season opener … Recorded six tackles … Coastal Carolina: Recorded one solo tackle vs. the Chanticleers … at Boston College: Broke up two of the Eagles’ passes, the most of his Kansas career in one game … Tallied four tackles on the night (two solo, two assisted) … West Virginia: Made four total tackles (two solo and assisted each) against the Mountaineers …at TCU: Tallied two solo tackles in Fort Worth … Oklahoma: Made a pair of tackles (one solo, one assisted) against the Sooners … at Texas: Broke up a Longhorn pass and made three solo tackles for the Jayhawks while in Austin …Texas Tech: Broke up a Red Raider pass attempt in KU’s Homecoming victory … Also registered two solo tackles in the win … Kansas State: Helped lead the Jayhawks’ defensive effort in the annual Dillons Sunflower Showdown by matching his season high of six tackles (five solo, one assisted) and hurrying the Wildcats’ quarterback, his first such statistic of the season as well as his KU career … at Oklahoma State: Contributed 2.0 tackles-for-loss (TFLs) for a total of four yards, besting his career high, which was previously set in 2017 against Texas, when he had 1.5 TFLs … Tallied five solo tackles in Stillwater against the nationally ranked Cowboys …at Iowa State: Earned his fourth-consecutive start, and fifth of the season, at cornerback in Ames … Tied his season high in tackles with six solos … Broke up a Cyclone pass … Recorded one TFL for a loss of three yards … Baylor: Made his sixth start of the season at cornerback for the Jayhawks, while seeing playing time in all 12 games.

2016 (Fr.): Saw action in eight games … Made two tackles, one at Memphis and the other against Oklahoma State … Broke up a pass against Rhode Island.

High School: A consensus three-star prospect according to Rivals, ESPN, Scout.com and 247Sports.com … Played under head coach Marvin Dantzler at Booker T. Washington HS … Helped lead the Hornets to a 10-1 record and a district title in 2015 … Tallied 29 tackles, including 15 solo stops, and 16 passes defensed as a senior … Also saw time on offense and special teams … Hauled in six receptions for 94 yards and a TD … Returned 10 punts for 408 yards and two scores … Also returned two kicks for 128 yards … Picked up First Team All-State honors by USA Today … Earned 2015 Class 6A East All-Star honors by the Oklahoma Coaches Assocation … Named to the Tulsa World’s 2015 All-Metro Second Team … Rated the No. 1 cornerback in Oklahoma by Rivals.com, Scout.com, ESPN.com and 247Sports.com … Named the No. 2 defensive back in the metro area and picked up All-State Second Team honors by the Tulsa World … Listed as No. 14 on The Oklahoman’s Super 30 players in the state list heading into his senior season … Selected Kansas after considering Kansas State, Illinois, Houston, Virginia Tech, Washington State and Memphis.

Personal: Son of Delbert and Leslie Mayberry … Has one brother, Duece, who is a freshman cornerback for the Jayhawks in 2020 … Majoring in communication studies with a minor in sport management.