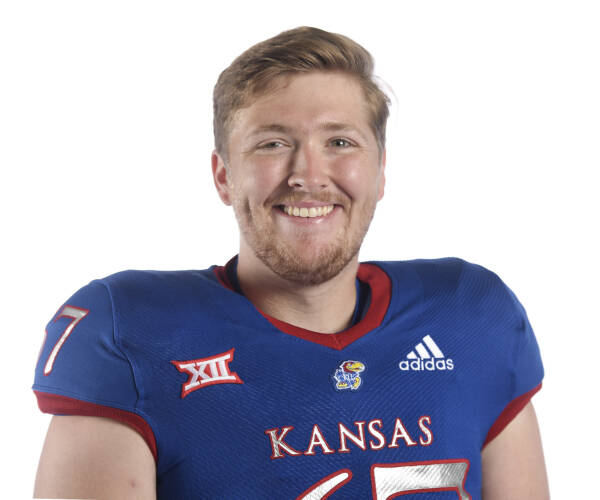 2020 (Sr.): Academic All-Big 12 Football First Team … Played in eight total games this year, missing only the TCU contest. Has appeared in seven games (vs. Coastal Carolina, at Baylor, vs. Oklahoma State, at West Virginia, at Kansas State, vs. Iowa State and at Oklahoma) so far this season for the Jayhawks … Has not recorded any stats … at Texas Tech: Returned to the field in Lubbock to close out the season having played in eight of KU’s nine games.

2019 (RJr.): Made appearances in 10 of KU’s 12-game season … Recovered one fumble during the year. Saw playing time in each of the Jayhawks’ first seven games of the season (Indiana State, Coastal Carolina, at Boston College, West Virginia, at TCU, Oklahoma and at Texas), but did not record any statistics… Texas Tech: Recovered a fumble, the first of his season and KU career, toward the end of the game to help KU secure a Homecoming victory over the Red Raiders … Kansas State: Played against the Wildcats in the annual Dillons Sunflower Showdown, but did not record any stats on the day … at Oklahoma State: Missed his first game of the season as the Jayhawks took on the nationally ranked Cowboys in Stillwater.

Personal: Son of Kenny Klusman and Simonne Saab … Has two siblings, Lauren and Drew … Majoring in communication studies with a minor in business.