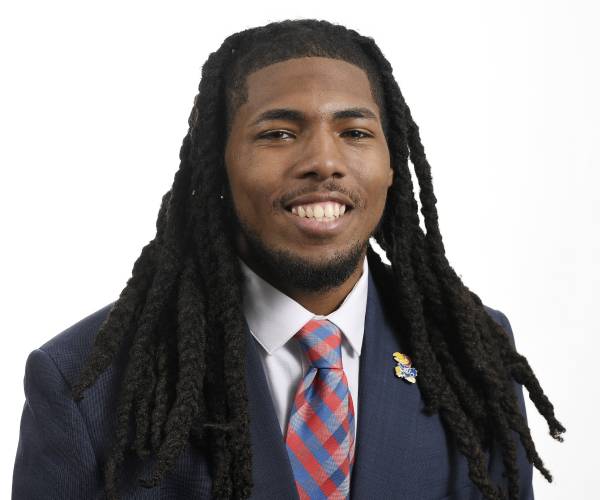 2019 (So.): In the starting lineup for six of KU’s first nine games of the season, of which he saw action in all nine of those contests … Broke up two passes on defense … Credited with 15 total tackles (12 solo, three assisted) in his time on the field for the year. Indiana State: Turned in a pair of tackles in the season opener … Coastal Carolina: Started at cornerback against the Chanticleers … Did not record any statistics … at Boston College: Recorded three total tackles (one solo, two assisted) in Chestnut Hill … West Virginia: Made his third-straight start of the season for the Jayhawks … Totaled three total tackles on the day, two solo and one assisted … at TCU: Recorded two solo tackles against the Horned Frogs … Also broke up a TCU pass in the end zone … Oklahoma: Made four solo tackles against the nationally ranked Sooners … at Texas: Started at cornerback for the Jayhawks for the sixth-straight game and has played in all seven this season … Tallied one solo tackle against the Longhorns … Saw playing time at home vs. both Texas Tech and Kansas State, but did not record any statistics … at Oklahoma State: Did not play in Stillwater due to injury sustained in the previous game of the season.

High School: Touted as a four-star recruit, the 13th-best cornerback and the sixth-best player in the state of Louisiana according to Rivals.com … Ranked No. 97 in the Rivals.com Top 100 … Also rated a four-star recruit by ESPN.com, Scout.com and 247Sports.com … Played for head coach Emanuel Powell at Landry-Walker HS … Led LWHS to a 13-2 record and the Louisiana Class 5A state championship in 2016 … Helped guide the Charging Bucs to the playoffs again in 2017 and an 8-4 overall mark, playing both quarterback and cornerback.