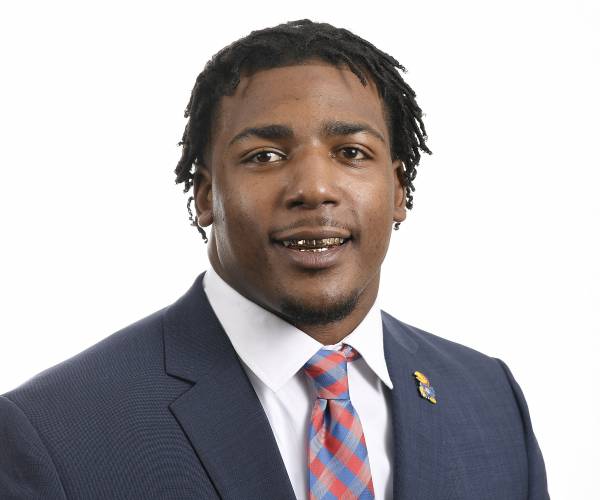 2019 (Sr.): Started 12 of out 12 games for the Jayhawks … Tied for ninth on the team in total tackles with 39 for the season (29 solo, 10 assisted) … With 4.5 tackles-for-loss, tied for fourth among KU defenders (his were good for a loss of 14 yards) … Also made 2.5 sacks for a loss of 13 yards … In addition, broke up a pass and hurried the opponents’ quarterbacks on two occasions. Indiana State: Started at defensive end for the Jayhawks … Contributed seven tackles, including one sack and one tackle-for-loss … Coastal Carolina: Made his second-consecutive start at defensive end … Made three solo tackles vs. the Chanticleers … Also had one sack, for a loss of seven yards, which match his previous career high in the category … at Boston College: Made one assisted tackle in his third start at DE for the Jayhawks …West Virginia: Started his fourth-straight game for KU at defensive end … Recorded five total tackles (two solo, three assisted) against the Mountaineers … Credited with 0.5 sack and 0.5 TFL (for a loss of four yards) as well … at TCU: Had one quarterback hurry, the first of his KU career, against the Horned Frogs … Credited with five total tackles in Fort Worth (two solo, three assisted) … Oklahoma: In Kansas’ starting lineup for the sixth-consecutive game at defensive end … Did not register any stats against the Sooners … at Texas: Started at defensive tackle for the Jayhawks and played against the nationally ranked Longhorns in Austin, but did not record any statistics on the evening … Texas Tech: Contributed four solo tackles in KU’s defensive effort against the Red Raiders that ultimately led to a 37-34 Homecoming victory … Kansas State: Among the Jayhawks’ leaders on the defensive side of the ball in the annual Dillons Sunflower Showdown, in which he recorded five total tackles (four solo, one assisted) … at Oklahoma State: Tallied four solo tackles in his 10th-consecutive start of the season for the Jayhawks while in Stillwater …at Iowa State: Tied his season and career high in TFLs with 1.0 against the Cyclones … Also recorded three tackles (two solo, one assisted) while in Ames … Baylor: Broke up his first career pass against the nationally ranked Bears … Tied his season and career highs with 1.0 TFLs (for a loss of two yards) … Contributed two tackles (one solo, one assisted) to the Jayhawks’ defensive effort on Senior Day.