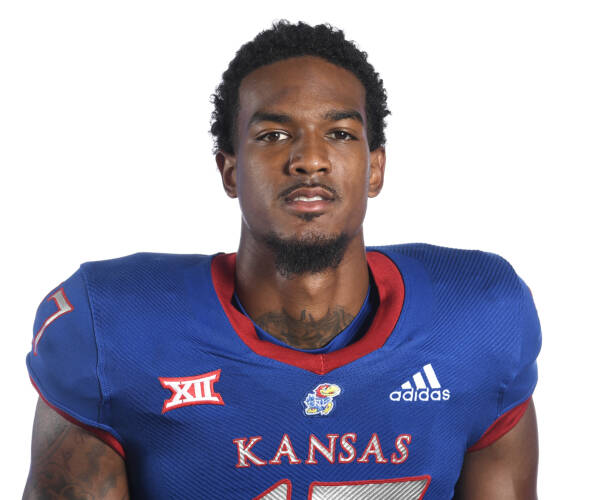 2020 (Sr.): In the Jayhawks’ starting lineup for eight of their nine games this season … Tied for 12th on the KU defense with 23 total tackles on the season (17 solo, six assisted) … Registered 3.0 TFL (for five yards) and broke up six passes on the season, second only to Karon Prunty’s 10 PBUs … On offense, carried the ball one time for a gain of four yards. Coastal Carolina: Made a single solo tackle against the Chanticleers in the Jayhawks’ season opener … at Baylor: Started at cornerback in Waco … Set a new career high with five tackles (three solo, two assisted) and also had 0.5 TFL for a loss of two yards … Oklahoma State: Made his second-straight start at cornerback for the Jayhawks against OSU … Recorded three tackles (two solo, one assisted), including 1.0 TFL for a loss of a yard … at West Virginia: In Morgantown, set new career highs in pass breakups with three and tackles-for-loss with 1.5 … Added four tackles (three solo and one assisted) to his stat line against the Mountaineers …. at Kansas State: Earned his fourth-straight start in the Dillons Sunflower Showdown … Collected two solo tackles on the afternoon … Iowa State: Made four tackles in the first half and tied a career-high five tackles, which he previously set at Baylor on September 26 … Also broke up one Cyclone pass … at Oklahoma: Made two tackles (one solo, one assisted) and broke up a pass against the Sooners … On offense, caught one pass for a gain of four yards … TCU: Made one solo tackle and broke up a pass against the Horned Frogs … Served as one of KU’s four captains for the game … at Texas Tech: Assisted on a tackle in Lubbock, his eighth start of the season while having played in all nine games.

2019 (RJr.): Played in seven of KU’s 12 games for the season … Made nine total tackles in those seven games, eight solos and one assisted … Also registered one tackle-for-loss (of two yards) on defense for the Jayhawks. Indiana State: Saw playing time against the Sycamores … Recorded two tackles … West Virginia: Made his second appearance of the season for the Jayhawks, but did not record any stats … at TCU: Registered a new KU-career high in tackles against the Horned Frogs with three total (two solo, one assisted) … Kansas State: Returned to the field for the Jayhawks after missing three-consecutive games … at Oklahoma State: Made his fifth appearance of the season donning the Crimson and Blue in Stillwater … Did not record any statistics on the afternoon … at Iowa State: Saw playing time against the Cyclones in Ames without recording any stats … Baylor: Recorded a new season and career high in tackles with four total, all of the solo variety … Also made his first tackle-for-loss as a Jayhawk against the nationally ranked Bears.

2016-17 (Fr.-So. at Ellsworth CC): Rated a three-star prospect according to Rivals.com … Collected 19 tackles and four interceptions during his sophomore season at Ellsworth CC … Named Iowa Community College Athletic Association (ICCAC) Defensive Athlete of the Week on Sept. 13, 2017 after helping lead the Panthers to a 35-28 win over Iowa Central … Recorded the game-saving interception and had two interceptions, two pass breakups and two tackles in the win … Credited with 11 tackles and three interceptions as a freshman in 2016 … Played for head coach Jesse Montalto at ECC.

High School: Recorded 18 total tackles, including 14 solo hits, as a senior at North Fort Myers HS … Posted one interception, which he returned 60 yards … Also credited with a fumble recovery … Coached by Earnest Graham at NFMHS.

Personal: Son of Collin and Monica Jones … Has two sisters, Cynthia and Samaria … Majoring in liberal arts and sciences.