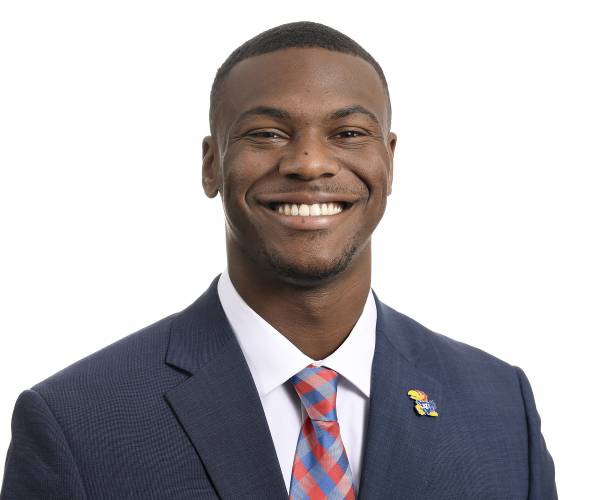 2019 (RJr.): Made two appearances on the year for the Jayhawks, at TCU and at OSU … Caught one pass in those two games, good for a gain of 21 yards. at TCU: Saw his first playing time of the season for the Jayhawks in Fort Worth … at Oklahoma State: Made his second appearance of the year in Stillwater … Caught one pass for 21 yards against the nationally ranked Cowboys, both of which were season-high stats for the wide receiver.

2018 (Jr.): Played in four games at wide receiver before redshirting … Caught two passes for 28 yards, including a season-best 20-yard reception … Averaged 14.0 yards per catch … Nicholls:  Recorded one reception for eight yards … at Baylor: Caught one pass for 20 yards.

2017 (So.): Played in all 12 games, starting two at wide receiver … Finished the season as KU’s fourth-leading receiver with 24 catches for 335 yards and one touchdown … Averaged 14.0 yards per reception … Turned in a career-high seven receptions against K-State … Posted his first 100-yard receiving game at Texas … SEMO: Hauled in one catch for seven yards … Central Michigan: Had one catch for 17 yards … at Ohio: Turned in three receptions for 77 yards … West Virginia: Collected 12 yards on one catch … K-State: Grabbed one pass for five yards … Baylor: Had two receptions for 40 yards … at Texas: Turned in his first 100-yard receiving game … Posted a career-best seven receptions for a career-high 104 yards … Oklahoma: Grabbed six receptions for 29 yards … at Oklahoma State: Caught his first-career touchdown … Totaled two catches for 44 yards.

2016 (Fr.): Played in eight contests: against TCU, at Baylor, Oklahoma State, at Oklahoma, at West Virginia, Iowa State, Texas and at K-State … at Baylor: Caught the first pass of his career – an eight-yard gain.

High School: Garnered a three-star rating by ESPN, 247Sports.com and Scout.com and two-star status by Rivals … Earned Class 24-5A Offensive MVP honors and was also named Class 24-5A All-District in 2015 … Played for head coach Shaun McDowell at Foster HS, where he helped lead the Falcons to back-to-back Bi-District titles … Hauled in 55 receptions for 876 yards and 14 touchdowns as a senior … Collected 33 catches for 705 yards and 10 scores as a junior in 2014 … Also lettered in hoops at FHS … Selected Kansas after considering Illinois and Maryland.

Personal: Son of Eric and Charlet Fairs … Has one sister, Erin, who played volleyball at South Florida and Louisville and is currently playing professionally overseas … Majoring in communication studies with a minor in sport management.