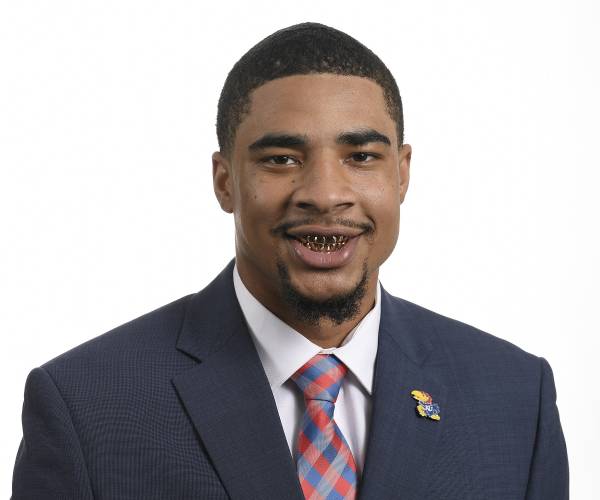 2019 (Sr.): Earned Honorable Mention All-Big 12 honors at the conclusion of his senior season … A staple in the KU defense, starting each of the team’s 12 games on the year … Just outside of the team’s top-10 for tackles (12th with 37 total; 27 solo and 10 assisted) … Made one interception, which he took back 57 yards … Broke up eight opponents’ passes on the year and registered one quarterback hurry from his cornerback position. Indiana State: Started at corner in the season opener … Got the Jayhawks going early with an interception that he returned 57 yards for a touchdown … Also recorded one tackle … Coastal Carolina: Broke up one pass vs. the Chanticleers … at Boston College: Contributed one tackle to the Jayhawks’ defensive effort vs. the Eagles … Also had a pass breakup in Chestnut Hill … West Virginia: Helped KU’s defensive effort against the Mountaineers, recording six total tackles (four solo, two assisted) … at TCU: Tied his KU career best with two pass breakups against the Horned Frogs … Made a single tackle on the day … Oklahoma: Has started each of Kansas’ six games so far this season … Contributed a pair of tackles to the Jayhawks’ defensive effort against the ranked Sooners … at Texas: Tallied a season-high seven tackles in Austin (five solo, two assisted) and broke up one Longhorn pass on the night … Texas Tech: Made five total tackles (four solo, one assisted) in the Jayhawks’ Homecoming victory over the Red Raiders, 37-34 … Kansas State: Contributed four solo tackles to KU’s defensive effort against its in-state rival … at Oklahoma State: Hurried the quarterback for the first time this season, as well as in his KU career, while also contributing two tackles on the day against the nationally ranked Cowboys … at Iowa State: Tallied three total tackles (one solo, two assisted) in Ames … Also broke up one Cyclone pass on the afternoon … Baylor: Among the top defensive players for KU against the Bears, having recorded five total tackles (four solo, one assisted) and breaking up two Baylor passes, which matched his season and career highs.

2018 (Jr.): Appeared in 12 games and started 10 as a junior … Credited with a total of 43 tackles on the season, including 31 solo … Recorded two tackles for a loss … Grabbed a season-best three interceptions, including a career-long 60 yard return … Nicholls: Recorded four tackles and two pass breakups … at Baylor: Recorded eight tackles with one tackle for loss … at West Virginia: Credited with seven tackles … Recorded career-high two interceptions in one game returned for a total of 88 yards … at Texas Tech: Credited with four tackles, a forced fumble and an interception returned for 37 yards … TCU: Totaled five tackles and a pass break-up … at Oklahoma: Totaled four tackles on the evening.

2017 (So): Played in 11 games, starting 10 at cornerback … Missed one games with illness … Recorded 42 tackles and a team-leading nine pass breakups … Also tied for the KU lead with two interceptions … Also had 1.0 tackle-for-loss … SEMO: Opened his KU career with five solo tackles and two pass breakups … Central Michigan: Registered one tackle and one breakup … at Ohio: Tallied four total tackles, including two solos … West Virginia: Snagged his first interception against the Mountaineers … Added three solo hits and one breakup … at Iowa State: Had one tackle and a breakup … at TCU: Credited with one stop … K-State: Had three total tackles … Baylor: Recorded five solo tackles and a pass breakup … at Texas: Tallied six tackles … Picked off his second interception of the season, returning it 10 yards … Oklahoma: Recorded four solo tackles … Turned in his first-career TFL … Also had a breakup … at Oklahoma State: Credited with a career-best nine tackles, including seven solos … Had one pass breakup.

2016 (Fr. at Kilgore College): Spent the 2016 season at Kilgore College (Texas) … Earned a consensus three-star rating from Rivals.com, ESPN.com and 247sports.com … Played for head coach J.J. Eckert and turned in 57 tackles while picking off five passes on the season … Intercepted two passes in two separate games in 2016 … Broke up 14 pass attempts … Produced 7.0 TFLs … Accrued a season-high nine tackles at Blinn College on Sept. 24.

Personal: Son of Amakeda Ponds … Chose Kansas over Cincinnati, Central Florida and Utah … Majoring in communication studies with a minor in sport management.