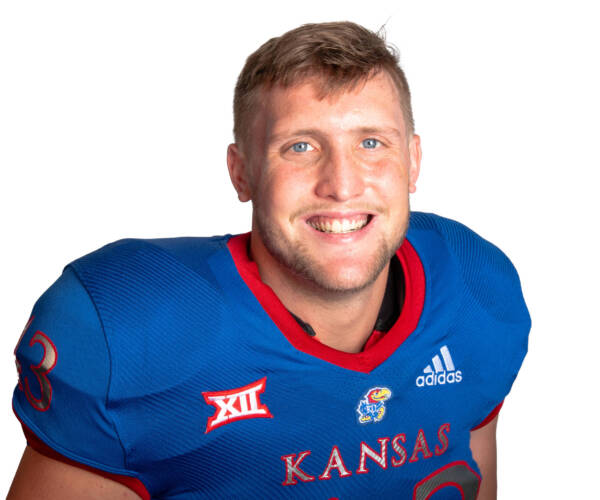 2019 (So.): Saw playing time in all 12 of the Jayhawks’ games … Eleventh among the team’s defenders with 38 total tackles on the season (26 solo and 12 assisted) … Recorded 4.5 tackles-for-loss (for 14 yards) … Also made one sack on the year, good for a loss of six yards … In addition, forced one fumble … On special teams, returned one kickoff for eight yards. Indiana State: Recorded two tackles in the season opener … Coastal Carolina: Made one tackle vs. the Chanticleers … at Boston College: Made four total tackles in Chestnut Hill (three solo, one assisted) as well as one tackle-for-loss, of three yards, vs. the Eagles … West Virginia: Compiled three tackles against the Mountaineers on the day … at TCU: Matched his career best in tackles with four against the Horned Frogs (two solo, two assisted) … Oklahoma: Made one solo tackle against the Sooners … at Texas: Tallied his first sack of the season, and his KU career, against the Longhorns … His 1.0 TFL resulted in loss of four yards for UT … Also made three solo tackles on the night … Texas Tech: Assisted on one tackle in KU’s 37-34 Homecoming victory over the Red Raiders … Kansas State: Made three total defensive stops against the Wildcats, two solo and one assisted tackles … at Oklahoma State: One of the Jayhawks’ defensive leaders in Stillwater against the nationally ranked Cowboys, where he set a new season and career high with six tackles (four solo, two assisted) … Ended the afternoon with 2.5 total TFLS for a loss of five yards, another season and career best … at Iowa State: Set a new season and career high with 10 tackles (six of the solo variety), surpassing his previous bests of six tackles, set at Oklahoma State in last week’s game (Nov. 16) … Baylor: Played in his 12th game of the season against the Bears, but did not record any stats.

Personal: Son of Joe and Jodi Dineen … Has three brothers: Joe Jr., Jax and Jet … Comes from a long line of Jayhawks as his brother, Joe, was a starting linebacker in 2015-16,18-19 … Both of his parents are KU grads and his mother, Jodi Oelschlager, was a volleyball letterwinner (1986-89) … Grandfather, Ron Oelschlager, played running back at KU (1962-64) … Great-grandfather, J. Roy Holliday, played basketball at KU under legendary coach Phog Allen (1936-37) … Majoring in psychology.