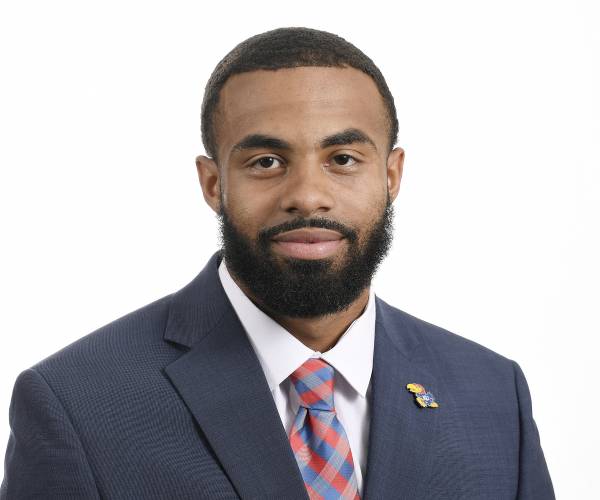 2019 (Sr.): An Academic All-Big 12 Second Team selection … Played in the first eight games of the season, earning starting nods in six of those contests … Registered 22 tackles (15 solo, seven assisted) … Intercepted one pass, which he returned for 13 yards … Made four pass breakups in his playing time, which was good for third among Jayhawk defenders for the year. Indiana State: Recorded an interception early in the third quarter which he returned for 13 yards, while also adding one tackle … Coastal Carolina: Started at safety vs. the Chanticleers … Did not record any statistics … at Boston College: Made two pass breakups against the Eagles, a new career high … Also tallied four total tackles (one solo, three assisted) while playing in Chestnut Hill … West Virginia: Broke up two Mountaineer passes to tie his Kansas career high … Made three tackles (one solo, two assisted) in the team’s Big 12 Conference season opener … at TCU: Totaled three solo tackles in Fort Worth … Oklahoma: One of two Jayhawks to register six total tackles against the Sooners, tops on the team … Four were of the solo variety, while the other two were assisted … at Texas: Made four solo tackles against the nationally ranked Longhorns.

2016-17 (Fr.-So. at Hartnell College): Rated a three-star recruit by Rivals.com … Collected 36 total tackles, including 29 solo hits, in 2017 … Recorded two interceptions, one of which he returned for a touchdown … Also posted two fumble recoveries … Two-time first team all-conference … Named Hit Man of the Year both seasons at Hartnell … Played for head coach Matt Collins at Hartnell … Named to the Dean’s List for his efforts in the classroom.

High School: Played on both sides of the ball at Mount St. Joseph HS under head coach Richard Holzer … Recorded 39 tackles on defense and also collected 479 receiving yards on 30 catches as a senior … Helped lead the Gaels to an 8-3 mark during his final season.