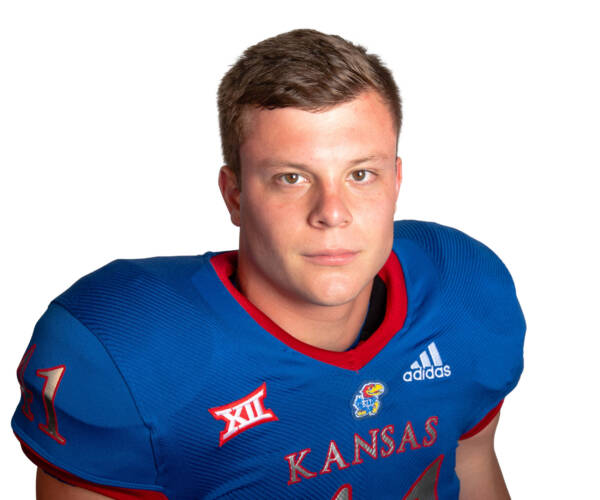 2020 (So.): Academic All-Big 12 Football First Team … Played in all nine of the Jayhawks’ games this season, making four starts on the year … Fifth on the team in total tackles with 30 (20 solos, 10 assisted) … Recorded 2.5 TFL and 22 yards as well as 2.0 sacks for a loss of 21 yards … Also had one pass breakup on defense. Coastal Carolina: Saw playing time against the Chanticleers in the Jayhawks’ season opener but did not record any stats … at Baylor: Again on the field for KU against the Bears in Waco without recording any stats … Oklahoma State: Made his first start as a Jayhawk at the linebacker position against OSU … Had a career day against the Cowboys, registering eight tackles (six solo, two assisted), 1.0 sack for a loss of nine yards and 1.5 tackles-for-loss (10 yards), all of which were new highs … at West Virginia: Contributed four tackles against the Mountaineers, two each of the solo and assisted varieties … at Kansas State: Did not have stats in his playing time against the Wildcats in Manhattan … Iowa State: One of three KU starting linebackers against the Cyclones … With eight total tackles (four each of the solo and assisted varieties), led the Jayhawks’ defensive effort on the afternoon and tied his career high, previously set vs. OSU … at Oklahoma: In the starting lineup at LB for the third time this season … Collected three tackles (two solo, one assisted) against the Sooners … TCU: Earned his fourth start of the season against the Horned Frogs, making two solo tackles against them on the day … at Texas Tech: Played in his ninth game of the season in Lubbock … Made five total tackles (four solo, one assisted) against the Red Raiders, in addition to breaking up a pass … Also recorded his second-career sack, taking down Texas Tech quarterback Alan Bowman for a loss of 12.

Personal: Son of Angie and David Channel … Has two sisters, Lily and Clare … Comes from a very athletic family as his father, David, competed in track & field at both KU and Wichita State; while his mom, Angie, played softball at Wichita State … His sister, Lily, plays softball at Johnson County Community College and two cousins, Dylan and Dana Channel, played basketball at Washburn University … Majoring in pre-exercise science and plans to pursue a career as an orthopedic surgeon.