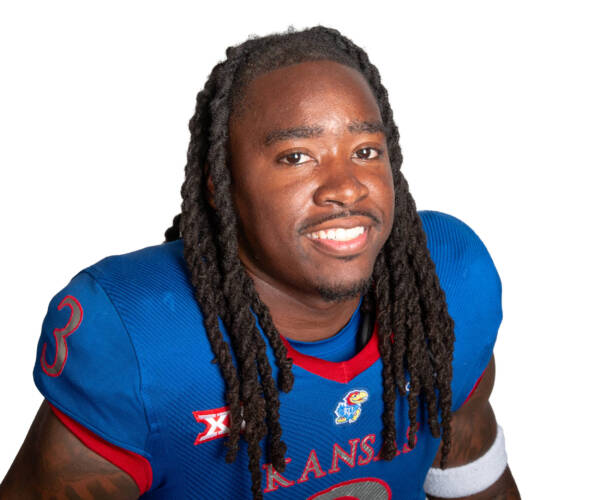 2020 (Sr.): A starter on defense for KU in each of the eight games in which he played this season … Tied for second amongst the Jayhawk defenders with 42 total tackles made on the season (24 solo and 18 assisted) … Broke up four passes, which was third on the team … Registered 0.5 TFL (of a yard). Coastal Carolina: Registered three tackles in the Jayhawks’ season opener (two solo, one assisted and 0.5 TFL for a loss of 1 yard) … at Baylor: Started at safety for the Jayhawks … Recorded three tackles for the second-consecutive game this season … at West Virginia: Collected a career-high seven tackles (four solo, three assisted) … Also registered a new career high in pass breakups (PBUs) with two of the Jayhawks’ 10 total PBUs on the afternoon … at Kansas State: Broke up a K-State pass in the Dillons Sunflower Showdown and made a solo tackle against the Wildcats … Iowa State: Tied his career-high seven tackles, with five coming in the first half, which moved his season total to 21 … at Oklahoma: Tallied a new career-high eight tackles against the Sooners in Norman, surpassing his previous high of seven, which he set at West Virginia (10-17-20) and vs. Iowa State (10-31-20) … He also tied a career-high four solo tackles, duplicating the mark he set at West Virginia earlier this season … TCU: Co-leader of the Jayhawk defense against the Horned Frogs with six total tackles (four solo, two assisted) … Tied his career high in solo tackles with four; he had made four solo tackles three times before, most recently last week against Oklahoma … at Texas Tech: Again the co-leader on defense for KU with seven total tackles (five solo and two assisted), bringing his season total to 42 tackles, good for second among all Jayhawks for the year.

2019 (Jr.): Played in each of KU’s 12-game season … Racked up 20 tackles for the year, 16 of the solo variety and four assisted … Made 1.0 tackle-for-loss of four yards … Had one interception on the season and broke up another opponent pass. Indiana State: Saw playing time but did not record any stats … Coastal Carolina: Recorded three solo tackles, his most this season … Also matched his career high with one tackle-for-loss … at Boston College: Did not record any statistics in his playing time while in Chestnut Hill … West Virginia: Assisted on one tackle against the Mountaineers … at TCU: Matched his career high in tackles with four in Fort Worth, all of which were solo tackles … Oklahoma: Contributed three tackles (two solo, one assisted) to Kansas’ defensive effort against the nationally ranked Sooners … at Texas: Made three tackles against the nationally ranked Longhorns, two solo and one assisted … Texas Tech: Played, but did not record any stats, in KU’s Homecoming victory over the Red Raiders, 37-34 … Kansas State: Made two solo tackles against the Wildcats in the annual Dillons Sunflower Showdown … at Oklahoma State: Made his 10th appearance of the season for the Jayhawk defense, but did not record any stats while in Stillwater … at Iowa State: Played in his 11th game of the season on defense for the Jayhawks … Notched two solo tackles against the Cyclones … Made his first pass breakup of the season, and his KU career, in Ames … Baylor: Picked off a Baylor Bears’ pass toward the end of the second quarter of play, his first interception of the 2019 season and second of his KU career … Also made two solo tackles on Senior Day.

2018 (So.): Played in eight games, starting three at safety … Recorded 11 tackles and one interception … Nicholls: Started at safety in the season-opener … Credited with one tackle … at Central Michigan: Turned in four total tackles and his first-career interception … Rutgers: Credited with one tackle … at Texas Tech: Totaled two tackles … Iowa State: Totaled two tackles including a TFL … at Oklahoma: Recorded one tackle.