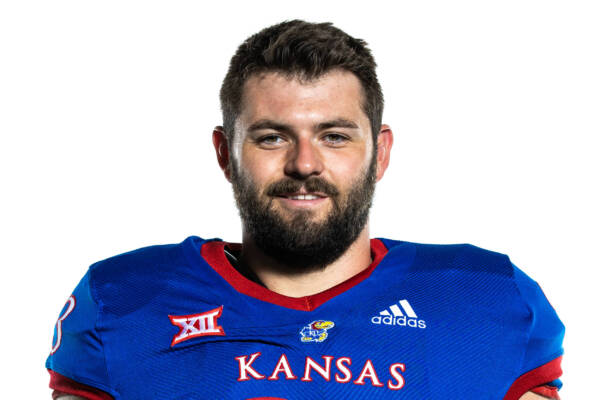 2020 (Sr.): Academic All-Big 12 Football First Team … Played in all nine games of the season and was in the starting lineup for seven of those contests …Totaled 15 tackles for the year (11 solo and four assisted) … Also registered 0.5 TFL. Coastal Carolina: A captain for the Jayhawks’ season opener … Started at defensive end and made two tackles (one solo, one assisted) against the Chanticleers … at Baylor: Started his second-straight game, this time at defensive tackle … Tied his career high with four tackles (three solo, one assisted) … Oklahoma State: Against OSU, made a pair of solo stops against the Cowboys after starting his third-straight game for KU … at West Virginia: Started his fourth-straight game against the Mountaineers … Made two total tackles (one solo and one assisted) on the afternoon … at Kansas State: Credited with 0.5 tackle-for-loss in the third quarter, marking his first TFL of the season … Also assisted on a tackle … Iowa State: Has played in each of the team’s first six games of the season, earning starting nods in four of those contests … Recorded two solo tackles against the Cyclones … at Oklahoma: Added a solo tackle to his stats in Norman, bringing his season total to 14 … TCU: Registered a solo tackle against the Horned Frogs … at Texas Tech: Starter at DT for KU in Lubbock, his seventh start of the season, while seeing playing time in all nine games … Did not record any stats on the day.

2019 (Jr.): Academic All-Big 12 First Team … Played in 10 of KU’s 12 games for the season, earning one starting assignment … Accumulated 15 total tackles on the season (12 solo and three assisted) in addition to 1.0 tackles-for-loss (of two yards). Indiana State: Started at defensive end in the season opener … Added four tackles … West Virginia: Returned to the field for the Jayhawks in their season-conference opener, where he totaled two tackles … at TCU: Recorded his first tackle-for-loss (of two yards) against the Horned Frogs … Registered two tackles on the day … Oklahoma: Saw playing time against the Sooners, but did not record any statistics … at Texas: Played in Austin against the nationally ranked Longhorns, but did not record any stats …Texas Tech: Registered two solo tackles against the Red Raiders in the Jayhawks’ Homecoming victory, 37-34 … Kansas State: Tallied two total tackles (one solo, one assisted) for the second-straight game against the in-state rival Wildcats … at Oklahoma State: Contributed one solo tackle to the Jayhawks’ defensive effort in Stillwater ... at Iowa State: Made one solo tackle against the Cyclones in Ames … Baylor: Recorded a solo tackle against the Bears in the Jayhawks’ season finale.

High School: Recorded varsity letters all four of his high school football seasons at Abilene (Kan.) High School … Was a three-year starter for head coach Steve Simpson … Helped the Cowboys to three-consecutive North Central Kansas League (NCKL) championships and a regional title in 2015 … Turned in 65 tackles, seven sacks and four pass breakups his senior season … Earned Kansas class 4A All-State honors as a defensive end in 2015 and an offensive lineman in 2016 … Named All-NCKL on both sides of the ball as a defensive end and offensive lineman in 2016 … As a junior, totaled 73 tackles, four sacks and a pass breakup … Also lettered in powerlifting, track and wrestling … Member of the honor roll, National Honor Society and German Honor Society … Also earned four letters in band and jazz band.