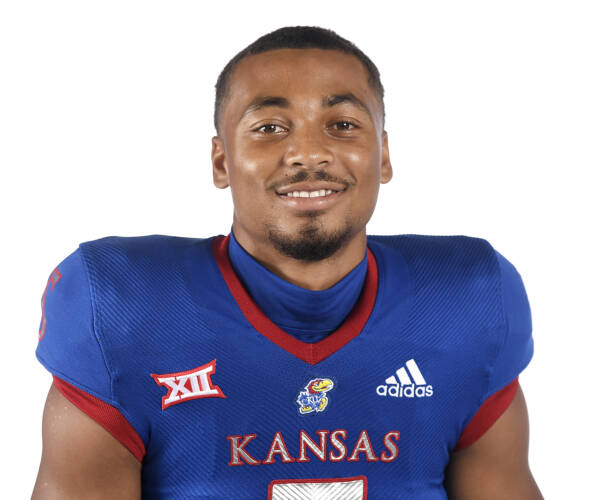 2020 (Sr.): Due to injury, was only able to play in three games this season … Caught a pair of passes for 35 yards, good for an average of 17.5 yards per catch, and a long reception of 23 yards. at Baylor: Made his first appearance this season in Waco, starting at wide receiver … Had one catch for 23 yards against the Bears … Oklahoma State: Started his second-consecutive game of the season at wide receiver against OSU … Did not record any stats … at West Virginia: Caught one pass for 12 yards after making his third-straight start of the season.

2019 (Jr.): An Academic All-Big 12 Second Team selection … Played in all 12 games, starting 11 … The Jayhawks’ second-leading receiver on the season with 45 catches for 727 yards and eight touchdowns … Averaged 16.2 receptions and 60.6 yards per game with a long catch of 65 yards … On special teams, returned 11 kickoffs for 247 yards, good for an average of 22.5 yards, with a long return of 30 yards … Carried the ball four times for 14 yards … Assisted on a tackle. Indiana State: Brought in one reception for 14 yards in the season opener … Coastal Carolina: Led the Jayhawks’ receiving corps with four catches for a total of 45 yards vs. the Chanticleers … at Boston College: Caught two passes for a total of 31 yards, with his long reception of the night being 27 yards … West Virginia: On the receiving end of five of quarterback Carter Stanley’s completions on the day … Compiled 48 yards on those five catches, with a long of 14 yards … at TCU: Made his fifth-straight start of the season at wide receiver for the Jayhawks … Did not record any stats against the Horned Frogs … Oklahoma: Had a career day against the nationally ranked Sooners, recording new Kansas highs in receptions (five), receiving yards (131) and a long reception of 39 yards … Connected with quarterback Carter Stanley for two touchdowns, both in the fourth quarter, another career best … at Texas:  Set numerous new season and career highs on his birthday against the Longhorns … Made his first-career rush, good for a gain of two yards, in the first quarter … Caught a career-high seven passes, accumulating 67 yards of offense for the Jayhawks … Two of those catches were in the end zone, tying his career high for receiving touchdowns in a game with two … Long reception of the night was good for 22 yards … Texas Tech: Had a breakout day at wide receiver for the Jayhawks, helping lead the team to a 37-34 Homecoming victory and breaking the majority of his KU-career-game highs in the process … Tallied a season and career high with 294 all-purpose yards (five rushing, 186 receiving, 103 on kick returns) … Robinson caught a total of six passes from quarterback Carter Stanley on the evening, setting new season and career highs in yards (186), touchdown receptions (2) and a long catch of 65 yards … His 103 yards on returns came off of four kickoff returns, with a long return of 30 yards … Rushed the ball once for a gain of five yards, a new career long … Kansas State: Gained 62 yards through the air on four receptions, with a long of 33 yards … Accumulated 62 yards on three kickoff returns against the Wildcats, with a long return of 24 yards … Totaled 124 all-purpose yards on the day in the annual Dillons Sunflower Showdown … at Oklahoma State: Hauled in his seventh touchdown pass of the season in Stillwater, which moved him into a tie for eighth in KU history in receiving touchdowns in a season … His seven touchdown receptions are the most by a Jayhawk since Steven Sims Jr., also hauled in seven receiving touchdowns … His TD catch was one of six receptions on the day, good for a total of 68 yards gained through the air … Returned two kickoffs for 36 yards, with a long return of 24, to bring his all-purpose yard total for the game to 104 … at Iowa State: Earned his 10th start at wide receiver in KU’s 11 games in Ames … Accumulated 75 yards receiving on five catches from quarterback Carter Stanley … His long reception of the day was 40 yards, which was also good for a touchdown, in the fourth quarter of play … That Stanley to Robinson connection was Robinson’s eighth TD reception of the season, which is tied for fourth most in a KU season … Carried the ball one time for the Jayhawks for six yards, which was a new season and KU-career high in rushing yards … Baylor: Assisted on a tackle against the Bears, the first of his season and KU career … One of the players of a seven-way tie for eighth place on the list for TD receptions in a season with seven … Fellow junior WR Andrew Parchment is also among those tied for eighth place on the records list … The last time two KU wide receivers caught a combined 15 touchdown passes came in 2009.

High School: Played two years on varsity for Narbonne HS under head coach Manuel Douglas … Had 65 receptions for 1,304 receiving yards and 17 touchdowns as senior … Named First Team All-City and All-Marine League as a senior … Helped lead the Gauchos to a Division 1A state championship in 2015 … A member of the honor roll all four years at NHS.