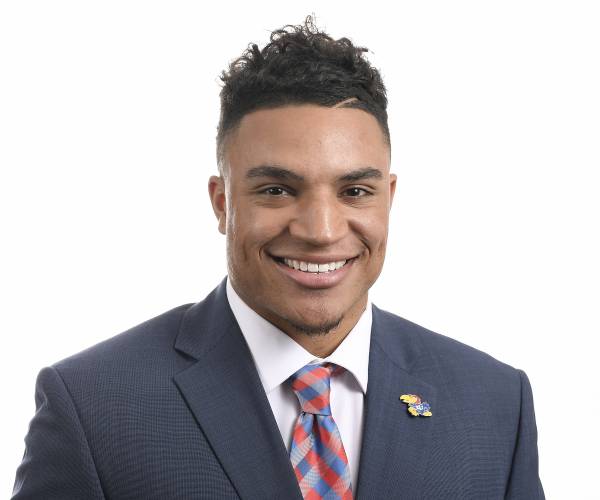 2019 (Sr.): Named to the Allstate AFCA Good Works Team … An Academic All-Big 12 Second Team selection … Nominated for many other awards throughout the season (see Career Honors above) … A starter for the KU defense in all 12 games … Second on the team in tackles with 71 (49 solo, 22 assisted), just one behind fellow senior Mike Lee’s 72 … Included were 4.5 tackles-for-loss (of 10 yards), which was fourth among the Jayhawks … Registered 0.5 sacks for a loss of 10 yards … Broke up one pass and hurried the opponents’ quarterback once on pass defense … Forced a fumble as well as recovered one. Indiana State: Started at nickelback in the season opener … Recorded five total tackles … Coastal Carolina: Filled up the defensive stat sheet for the Jayhawks with eight total tackles (six solo, two assisted), 0.5 sacks for a loss of four yards and one forced fumble on the night … at Boston College: Started his third-straight game in the Kansas backfield … Racked up nine total tackles against the Eagles (two solo, seven assisted) … West Virginia: Tallied six tackles (three solo and three assisted) in the team’s Big 12 season opener … at TCU: Just shy of reaching double-digit tackles with nine total (seven solo, two assisted) against the Horned Frogs … Also had one tackle for a loss of two TCU yards … Oklahoma: One of two Jayhawks to lead the defense with six total tackles on the day (five solo, one assisted) … Registered one TFL for a loss of one yard … at Texas: Second on the team in tackles with eight total in Austin (five solo, three assisted) … Recovered a fumble, his first of the season, and third of his KU career … Texas Tech: Made two solos tackles in the Jayhawks’ 37-34 Homecoming victory over the Red Raiders … Kansas State: Shared the team lead in tackles with Davon Ferguson, as each player recorded eight total on the day … Torneden made six solo tackles and assisted on two more … Matched his season high in TFLs with 1.0 against the Wildcats … Also recorded his first pass breakup of the season … at Oklahoma State: In the Jayhawks’ starting lineup on defense for the 10th-consecutive game this season … Tallied two tackles (one solo, one assisted) and recorded 0.5 TFL on the afternoon in Stillwater against the nationally ranked Cowboys … at Iowa State: Earned his 11th start of the season in Ames … Made four solo tackles on the afternoon … Second on the team in total tackles with 67, just behind fellow senior teammate Mike Lee’s 69 tackles on the season … Baylor: Concluded his Kansas career with four solo tackles against the nationally ranked Bears on Senior Day.

2018 (Jr.): Started at 12 games on defense … Also served as the holder on extra points and field goals … Ranked second on the team in tackles with 91 … Recorded 5.5 TFLs, 2.0 sacks, two quarterback hurries and two fumble recoveries … Returned an interception 39 yards for a touchdown against Rutgers … Nicholls: Started at nickelback in the season-opener … Turned in seven tackles … at Central Michigan: Recorded five tackles, including 1.0 TFL … Also recovered a fumble … Rutgers: Recorded his first-career interception, returning it 39 yards for a touchdown … Also had six tackles and a fumble recovery in the win … at Baylor: Started at safety … Recorded nine tackles and one TFL … Oklahoma State: Recorded 11 tackles and one TFL … at West Virginia: Recorded a career-high 13 tackles with one TFL … at Texas Tech: Totaled 10 tackles with a quarterback hurry … TCU: Totaled nine tackles … Iowa State: Recorded his first sack on the season … Totaled seven tackles … at Kansas State: Recorded three tackles and a sack … at Oklahoma: Tallied six tackles on the evening against the Sooners … Texas: Recorded five tackles against the Longhorns.

2017 (So.): Saw action in 11 games, starting all 11 at nickelback … Missed the Oklahoma State game with an injury … Finished fourth on the team with 61 tackles … Had 5.0 tackles-for-loss and 2.0 sacks … Recorded three quarterback hurries and one pass breakup … SEMO: Posted six tackles … Central Michigan: Turned in five solo stops … at Ohio: Had six tackles and 1.0 TFL … West Virginia: Set a career high with nine tackles, including seven solos … Texas Tech: Had three stops … at Iowa State: Posted six tackles, four being solos … Also had 1.0 TFL … at TCU: Collected five tackles and a career-high 2.0 TFLs, one of which was a sack … K-State: Recorded four solo tackles in the Sunflower Showdown to go along with a sack and 1.0 TFL … Baylor: Registered five total hits … at Texas: Had six tackles … Oklahoma: Finished with six solo tackles.

2016 (Fr.): Played in 11 games … Started at West Virginia at nickelback … Provided 10 tackles … Made a personal-best four tackles at Texas Tech … at Memphis: Recorded the first tackle of his career on punt coverage … at Texas Tech: Turned in a career day after posting a personal-best four stops against the Red Raiders … at Baylor: Provided one tackle against the Bears … at Oklahoma: Contributed one tackle … at West Virginia: Notched two stops against the Mountaineers.