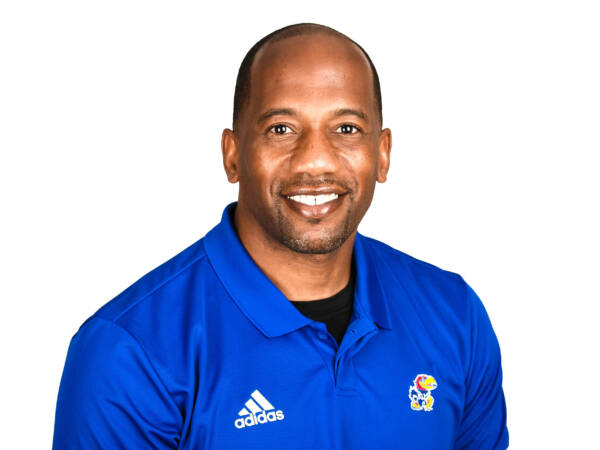 Emmett Jones is preparing for his third season at Kansas. Jones was hired as the wide receivers coach in December, 2018 and was promoted to passing game coordinator following the 2019 season.

Jones, who mentors the Jayhawks wide receivers, had a strong first season in the Crimson and Blue as he coached Andrew Parchment and Stephon Robinson Jr., to all-conference honors. Additionally, Parchment was the Big 12 Newcomer of the Week following his outing against West Virginia and Robinson was named to the Paul Hornung Award Honor Roll after his play against Texas Tech.

In year two under Jones, the Kansas wide receivers had a spark of youth, as true freshmen Luke Grimm and Lawrence Arnold saw valuable playing time, including Grimm’s 19 receptions for 255 yards and two touchdowns. Kansas senior Kwamie Lassiter II led the unit for the first time in his career, accumulating a career-high 43 catches for 458 yards and two touchdowns.

Jones came to Kansas after spending three seasons as outside receivers coach on Kliff Kingsbury’s staff at Texas Tech. He was promoted to the position immediately following the 2015 season. Jones, who previously served as Tech’s Director of Player Development in 2015, saw his unit find immediate success during the 2016 campaign as the Red Raiders led the country in total offense (566.6 yards per game) as well as passing offense (463.0 yards per game). Tech averaged 43.7 points per game – its third-highest mark in school history – which ranked fifth nationally among FBS programs.

Cantrell and fellow receiver Keke Coutee both heard their names called during the 2018 NFL Draft as Cantrell was selected in the sixth round by the Los Angeles Chargers. Fellow outside receiver Derrick Willies also received an opportunity at the next level as he signed a free agent agreement with the Cleveland Browns shortly after the draft.

T.J. Vasher developed into a significant deep threat under Jones after catching 29 passes for 545 yards and six touchdowns as only a redshirt freshman in 2017. Vasher turned in two 100-yard performances during Big 12 play as he recorded all but two of his receptions during the final eight games of the year. He averaged 18.8 yards per catch overall, which ranked 22nd nationally at the end of the season.

In 2018 Jones coached Antoine Wesley, who was named a first-team All-American by the Football Writers Association of America, All-Big 12 First Team by the Associated Press and All-Big 12 Second Team by the league coaches and a semifinalist for the Biletnikoff Award.

Wesley was among the FBS leaders in 2018 in almost every receiving category after hauling in 88 passes for 1,410 yards and nine touchdowns. He ranks second nationally in receiving yards and receiving yards per game (117.5) as well as eighth in receptions per game (7.3). He was the Big 12 leader in all three categories. Wesley’s 1,410 receiving yards ranks third all-time in Texas Tech history.

Jones arrived in Lubbock to oversee Tech’s player development in February 2015. In his one year in that role, Jones served as a mentor for the Red Raider offense and was also instrumental in Tech’s on-campus recruiting activities.

Jones came to Tech following three seasons as the head coach at South Oak Cliff, one of the top high school programs in the state of Texas. The Golden Bears were a combined 30-8 under Jones, advancing deep in the Class 4A and 5A playoffs over all three seasons. In addition, South Oak Cliff was a hotbed for talent and annually produced several players who signed with Division-I programs, including five players who signed in 2014.

South Oak Cliff was the first head coaching position for Jones after making several stops as an assistant in the Dallas area. Jones previously spent seven seasons at nearby Dallas Skyline High School prior to his arrival at South Oak Cliff. He began his tenure at Skyline as wide receivers coach before later being promoted to offensive coordinator.

Jones, who was a walk-on at Texas Tech during the mid-1990s, began his coaching career at his alma mater Seagoville High School from 2001-04. He later joined the Dallas Lincoln staff for one year before heading to Dallas Skyline.

Jones graduated from North Texas in 1999. He and his wife, Marlo, have two children, Emily and Emmett.