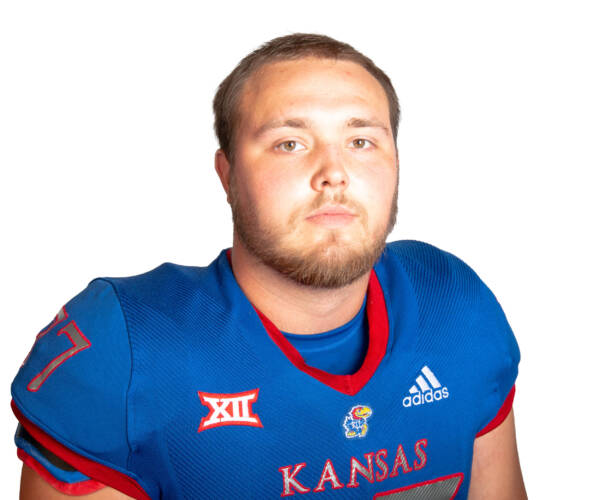 2020 (Fr.): Played in four of the Jayhawks’ last five games of the season … Earned starts in the final two games, vs. TCU and at Texas Tech. at Kansas State: Saw his first playing time as a Jayhawk in the Dillons Sunflower Showdown … at Oklahoma: Made his second appearance in the Crimson and the Blue in Norman; did not record any stats on the afternoon … TCU: One of six true freshmen to start on offense for KU against the Horned Frogs … His first-career start came at the RT position … at Texas Tech: Earned his second-consecutive start of the season at RT in Lubbock, which was his fourth appearance for the Jayhawks this fall … Did not register any statistics on the day.

High School: Coached by head coach Cal Fullerton at Clovis HS … Helped lead the Wildcats to the district championship in 2019 … Earned All-State First Team honors on offense as a senior … Also named All-State Second Team on defense … Picked up All-District First Team honors in 2019 … Named the Golden Helmet Award winner as a senior … Picked up Most Improved Player honors for Clovis HS in 2018 … Also lettered in basketball and baseball … Helped lead the Wildcats to the 2019 district tournament basketball title as a junior, on his way to honorable mention all-district honors … Earned all-district honors in baseball as a junior.

Personal: Son of Brendi and Tyler Cabeldue … Has one sister, Kaci, and two brothers, Cole and Roddy … Plans to major in business.