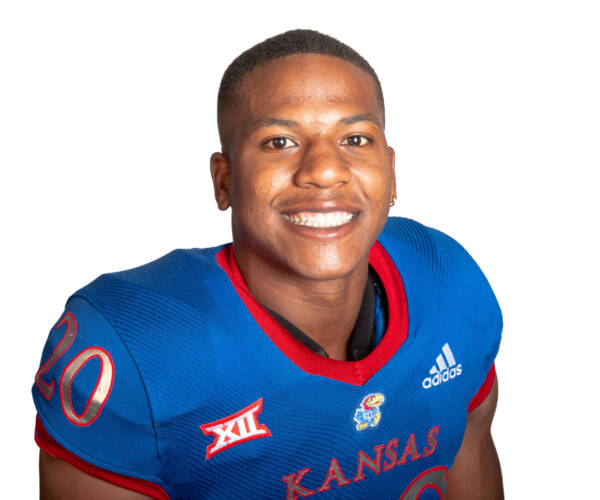 2020 (Fr.): The team’s second-leading rusher this fall, accumulating 229 net yards on 52 carries, good for an average of 4.4 yards per carry … The freshman RB found the end zone twice in his first season donning the Crimson and Blue … His long rush of the season went for 47 yards and he averaged 28.6 yards per game … Through the air, he caught five passes for a total of 28 yards, good for an average of 5.6 yards per reception … On kickoffs, returned four for 45 yards, good for an 11.2 average, with a long return of 19 yards. Coastal Carolina: Made his collegiate debut against the Chanticleers … Carried the ball two times for two yards … at Baylor: Rushed the ball once against the Bears in Waco … Oklahoma State: Gained 51 yards on five carries, with a long rush of 15 yards, against OSU, new career bests in all categories … at West Virginia: Saw playing time in Morgantown but did not record any statistics … at Kansas State: In the starting lineup at running back for the first time this season and in his collegiate career … Carried the ball six times for a total of 14 yards … Has appeared in all 5 games this season, rushing a total of 14 times for 67 yards … Iowa State: Scored his first-career touchdown as a Jayhawk in the second quarter against the Cyclones for KU’s first touchdown of the game … Has played in each of the team’s first six games of the season, rushing a total of 20 times for 69 yards … at Oklahoma: In the third quarter, recorded a 47-yard rush, a career long … It was the second-longest rush by a Jayhawk this season and the longest rush that didn’t result in a touchdown … Also set new career highs in rushing yards (73) and attempts (10); his previous bests were six rushes (accomplished on two occasions) and 51 yards … at Texas Tech: Made his third start (at RB) while playing in his eighth game of the season for the Jayhawks … In the fourth quarter he found the end zone on a 12-yard touchdown run, the second of his career … The TD gives him two in his last three games … Registered a career high in rushing attempts and yards, carrying 22 times for 87 yards … His previous high of 10 carries for 73 yards came at Oklahoma (11/7) … Also caught three passes from QB Miles Kendrick for a gain of 21 yards through the air.

High School: Rated as a three star recruit by Rivals.com, 247 Sports and ESPN … Ranked No. 25 in the state of Oklahoma, according to 247 Sports … Played in 36 games for Moore HS for head coach Brad Hill, where he rushed for 1,099 yards in his senior season … Recorded 2,544 career rushing yards and 45 touchdowns … Averaged 91.6 yards per game and 6.4 yards per carry his senior year … Named the overall or offensive player of the game six games in a row in 2019 … Earned Most Valuable Player of District 6A-I-2 in 2019.

Personal: Son of Toddrick and Shirley Noel … Has three siblings: one brother, Jawaun, and two sisters, Tiara and Brooklyn … Has yet to decide upon a major … His cousin, Donovan Gaines, also plays for the Jayhawks … Chose Kansas over offers from Eastern Michigan, Nevada, North Texas, Southern Miss and others.