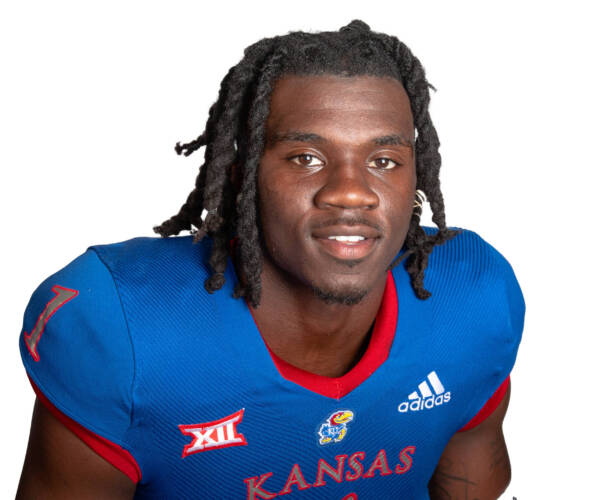 2021 (Jr.): Led the Big 12 Conference with 113 tackles in 2021, the most by a Jayhawk since 2018 … Logan’s 113 tackles were the most by a safety in the NCAA … Of Logan’s 113 total tackles, 79 came unassisted, most in the Big 12 Conference and third nationally among all players … He was the only player in the country to have at least 113 tackles, six pass breakups and multiple forced fumbles in the season … Had five games with at least 10 tackles, including a career-high 15 tackles at TCU … Against the Horned Frogs, he also recorded two tackles-for-loss, becoming the first Kansas defensive back to have 15 tackles and multipole tackles-for-loss in a game since Chris Harris in 2009 … Along with his six pass breakups on the season, he recorded an interception against Texas Tech.

2020 (So.): All-Big 12 Honorable Mention (Returner) … Started on defense for the Jayhawks in eight games, while playing in all nine on the year … Tops among all Jayhawks in tackles with 58 total for the season (40 solo and 18 assisted) … Had 1.0 TFL (of six yards) and well as 1.0 sack for a loss of six yards … On pass defense, the sophomore cornerback registered one quarterback hurry, broke up three passes and made two interceptions, with a return of 12 yards, on the year … Also forced one fumble … On special teams, returned 13 kickoffs for a total of 345 yards, good for an average return of 26.5 yards … His longest return of the season was against ISU, when he went 100 yards for a touchdown. Coastal Carolina: Set a new career high in tackles with seven, surpassing his previous best of three, set three times in 2019 … Returned one kick for 24 yards against the Chanticleers … at Baylor: Led KU’s defense at Baylor with seven tackles, 1.0 sack and 1.0 TFL … Tied his career high in tackles, surpassing his previous high of three set against K-State in 2019 … In the fourth quarter, recorded his first-career sack on Baylor quarterback Charlie Brewer … The sack was a loss of six yards, while Logan also stripped Brewer for his first-career forced fumble … Oklahoma State: Again tops in tackles for the Jayhawks’ defense with 12 total (eight solo, four assisted), a new career high … Also broke up one Cowboy pass after earning his second-straight start at safety … at West Virginia: Collected eight tackles (five solo, three assisted) in Morgantown and broke up a Mountaineer pass … at Kansas State: One of three Jayhawk captains for the annual Dillons Sunflower Showdown … Co-leader of the defensive effort in Manhattan, as he collected six solo tackles on the afternoon … His season total of 40 tackles leads the team … Iowa State: Tallied his first-career interception in the fourth quarter, returning it 12 yards to the Kansas 30-yard line … Also made three solo tackles and broke up one ISU pass on the afternoon … Leads the team with 43 total tackles on the season through six games … The sophomore’s 100-yard kick return for a touchdown in the third quarter was the first of his career and he finished with 124 kickoff return yards in the game … The 100-yard return is the longest return of the season and is tied for second in program history – tied with Greg Heaggans vs. Missouri State (Sept. 14, 2002), Eric Vann vs. Oklahoma (Oct. 5, 1996) and June Henley vs. Colorado (Nov. 13, 1993) … at Oklahoma: One of three team captains for the Jayhawks in Norman … Intercepted an OU pass in the first quarter, his second INT in as many games … With his interceptions in back-to-back games, Logan became the first Jayhawk to accomplish such a feat since 2018, when Shakial Taylor recorded interceptions in consecutive games against Texas (11-17-2018) and Oklahoma (11-23-18) … Also returned five kickoffs, a new career high, for 118 yards with a long return of 38 yards on the afternoon … TCU: Recorded five tackles on the day (three solo, two assisted) and also registered a quarterback hurry against the Horned Frogs … Returned four kickoffs for a total of 64 yards, with a long return of 27 yards on the afternoon … at Texas Tech: Tallied three total tackles (two solo, one assisted) vs. the Red Raiders … Made his eighth start of the season (at the safety position) while having played in all nine of KU’s games … On special teams, returned one kickoff for 15 yards.

2019 (Fr.): Saw playing time in all 12 of KU’s games as a true freshman … Contributed 14 total tackles to the Jayhawks’ defensive effort throughout the season (11 solo and three assisted) … The team’s top punt returner on the year, totaling 28 yards on five returns … That was good for an average of 5.6 yards per punt return with a long return of 14 yards … Also saw action on special teams as a kick returner; returned nine kickoffs for 160 yards, an average of 16.7 yards per return, with a long return of 25 yards. Indiana State: Saw action in the return game in the season opener … Returned one kick for 16 yards … Coastal Carolina: Saw playing time vs. the Chanticleers … Did not record any stats … at Boston College: Made three solo tackles on special teams, a new career high, in the Jayhawks’ win over the Eagles … West Virginia: Did not record any statistics in his playing time against the Mountaineers … at TCU: Compiled 40 yards on three kickoffs, with a long return of 16 yards against the Horned Frogs … Oklahoma: Returned one kickoff for 24 yards … at Texas: Made his first punt return as a Jayhawk, good for 14 yards … Texas Tech: Tied his season and career high in tackles with three in KU’s Homecoming victory over the Red Raiders … Kansas State: Made three total tackles (two solo, one assisted) for the third time this season in the annual Dillons Sunflower Showdown … at Oklahoma State: Tallied a pair of tackles (one solo, one assisted) against the nationally ranked Cowboys in Stillwater … Returned a season and career-high two OSU punts for a total of six yards on special teams … at Iowa State: Returned one Cyclone punt on the afternoon, good for eight yards … Also made one solo tackle in Ames … Baylor: Set new season and career highs in kickoffs returned with four, good for a total of 70 yards, with a long return of 25 yards … Recorded a pair of solo tackles against the nationally ranked Bears … Also had one punt return on the afternoon.