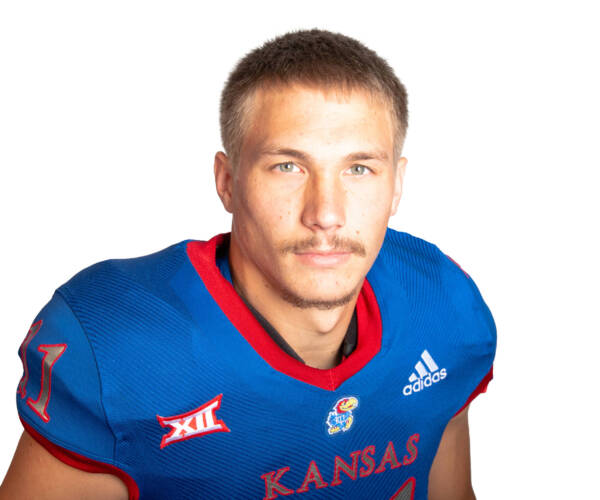 2021 (So.): Saw playing time in 10 of KU’s 12 games, while starting six of those games … With 376 all-purpose yards, he had 22 receptions for 349 yards and three TDs … South Dakota: Started against the Coyotes … Collected 27 yards on a kick-return … at Coastal Carolina: Saw action for the Jayhawks … Set new season and career highs of five receptions for 75 yards … Baylor: Made two catches for 25 yards … at Duke: Contributed for KU, did not record any stats … at Iowa State: Made one catch for 22 yards … Texas Tech: Posted three catches for 33 yards and one TD … Oklahoma: Tallied three catches for 50 yards and one TD … at Oklahoma State: Saw action against the Cowboys … Did not record any stats … Kansas State: Did not see game action … at Texas: Did not see game action … at TCU: Recorded four catches for 39 yards and one TD … West Virginia: Tallied four catches for 105 yards against the Mountaineers.

2020 (Fr.): Came on strong at the end of the season, making five of his six season appearances in the final five games of the year … Earned two-consecutive starts at WR, at OU and vs. TCU … Third on the team with 19 receptions for the year and second among the KU receivers with 255 yards accumulated through the air … Averaged 13.4 yards per catch, with a long reception of 37 yards … In a three-way tie for the team lead in receiving touchdowns with two for the season … On the ground, carried the ball three times for a net gain of 10 yards … Contributed one solo tackle and forced a fumble to round out his season stats. Oklahoma State: Made his collegiate debut against OSU, but did not record any stats … at Kansas State: Recorded his first statistics of the season in the Dillons Sunflower Showdown, catching one pass from fellow freshman quarterback, Jalon Daniels, for 28 yards … It marked the Jayhawks’ longest reception of the day … Iowa State: Playing in his third game in the Crimson and Blue, set career highs in receiving yards with 53 and receptions with four …  His 36-yard reception in the second quarter was a season high, breaking the 28-yard reception he had at Kansas State … at Oklahoma: Forced the first fumble of his career on an Oklahoma interception return, which Earl Bostick Jr., recovered for Kansas … His forced fumble was the first by an offensive player since Josh Ford, a wide receiver, forced a fumble against Rice (9-8-2012) … Set a career high with 61 receiving yards, besting his 53-yard performance vs. Iowa State on four receptions, while adding two rushing attempts for 12 yards … TCU: One of six true freshmen to start on offense for KU against the Horned Frogs … It was his second-straight start at WR for the Jayhawks … Caught his first-career touchdown on a 14-yard pass from Miles Kendrick with 20 seconds left in the first half … Hauled in his second touchdown of the game on another throw from Kendrick, becoming the first KU receiver with multiple touchdown receptions in a game this season and the first since Stephon Robinson Jr., caught two against Texas Tech in 2019 … Tied a career high in receptions and set a career high receiving yards with four receptions for 72 yards … His previous best came against OU last week when he put up 61 yards on four receptions … at Texas Tech: Played in his sixth game of the season in Lubbock … Set a career high in receptions with six, hauling in those six passes for 41 yards.

High School: Ranked as the No. 7 wide receiver in the state of Missouri, according to Max Preps … Rated as a three star recruit by Rivals.com, 247 Sports and ESPN … Chosen as a finalist for the Thomas A. Simone award (Most Outstanding high school football player in the Kansas City Metropolitan Area) and the Otis Taylor Award (Most Outstanding wide receiver/tight end in the Kansas City Metropolitan area) … Played in 33 games as a wide receiver for Raymore-Peculiar High School in Peculiar, Missouri, where he recorded 853 receiving yards and 10 touchdowns in 2019… Had 2,443 career receiving yards and 559 career rushing yards in three seasons at Ray-Pec.

Personal: Son of Todd and Pepper Grimm … Has one sister, Maddi.