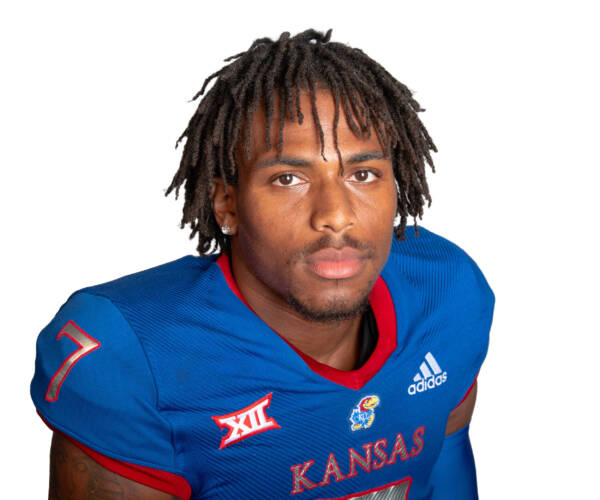 2021 (R-So): Saw playing time in all 12 games for the Jayhawks, while starting seven of those … With 426 all-purpose yards, he posted 27 receptions for 364 yards and one TD … Rushed for 42 yards off of seven carries … Returned a single kick for 20 yards … Posted two tackles (one solo, one assisted) … He also punted twice for 85 yards, with 43 yards being the longest … South Dakota: Had five catches for 50 yards in the win against the Coyotes … at Coastal Carolina:  Started against the Chanticleers … Had one reception for 39 yards … Baylor: Caught first career TD for KU off of a 5-yard reception … Had one rush for 14 yards … at Duke: Set new season high and career high catching five passes for 122 yards … at Iowa State: Made three catches for 55 yards … Texas Tech:  Started for fifth consecutive game …Tallied two receptions for 16 yards … Also had one rush for four yards against the Red Raiders … Oklahoma: Saw action against the Sooners recording two rushes for four yards … at Oklahoma State: Contributed two rushes for four yards and one kick-off return for 20 yards … Kansas State: Had four carries for 53 yards … at Texas: Made two catches for 12 yards … Also had one rush for three yards in the 57-56 overtime win against the Longhorns … at TCU: Saw playing time for KU … West Virginia: Made two receptions for eight yards … Had two rushes for 17 yards.

2020 (R-Fr. at Buffalo): Saw action in seven games for the Bulls…Totaled 16 catches for 319 yards and three touchdowns on the season…Finished the season with three catches for 50+ yards…Posted a 100-yard effort against Miami (Ohio) with two catches for 103 yards, including a 78-yard touchdown catch…Also notched a touchdown against Akron…Posted a career-high six catches for 118 yards against Ball State.

High School: Prepped at Amos P. Godby High School…Had 33 catches for 972 yards and 12 touchdowns as a senior…Named First-Team All-Big Bend…Helped guide his team to an 11-1 record and playoff appearance as a senior…Team advanced to the Class 5A Regional Semifinals.