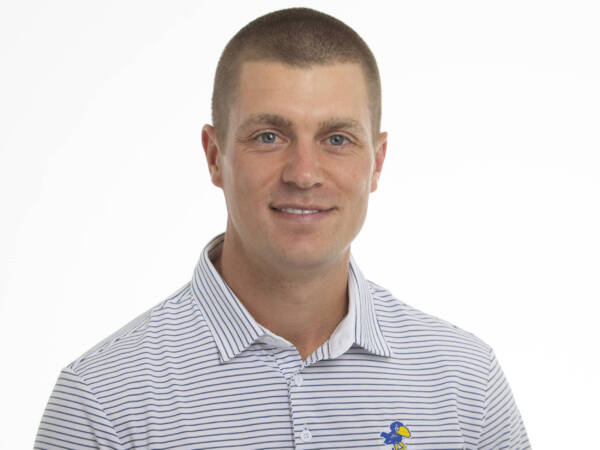 Former letterwinner Chris Gilbert returned to the Kansas Men’s Golf program as a member of the coaching staff, joining as a volunteer assistant during the 2020-21 season.

“We’re excited to have Chris back at KU,” Coach Jamie Bermel said. “I think his experience as a pro golfer and as an assistant coach at two different programs will definitely help our program. I think he can help all of our players get better.”

Gilbert spent the previous two seasons serving as an assistant coach at Wisconsin. He coached the Badgers to two team titles, including the 2018 Pinetree Intercollegiate and the 2019 Musketeer Classic. The Badgers achieved the lowest team scoring average in school history in a single season (292.96), and also saw success individually by having three individual medalist titles, an NCAA Individual Regional appearance (Jordan Hahn), and the lowest individual scoring average in program history (Hahn/71.68).

Prior to his time at Wisconsin, Gilbert spent two seasons as an assistant at Washington State. There, Gilbert helped lead the Cougars to two team titles by becoming the back-to-back Itani Quality Homes Collegiate Champions (2016/2017), with Nick Mandell taking individual medalist honors in 2016.

“I am very excited for the opportunity to come back and help the Kansas Men’s golf team,” Gilbert said. “Having played here, it means a lot to me to be able to give back to the program. I have followed the program closely since graduating in 2013 and it has been very exciting to watch the growth and success KU Golf has had. I want to thank coach Bermel and coach Wilson for the great job they have done to elevate the program and for allowing me the opportunity to come back and contribute.”