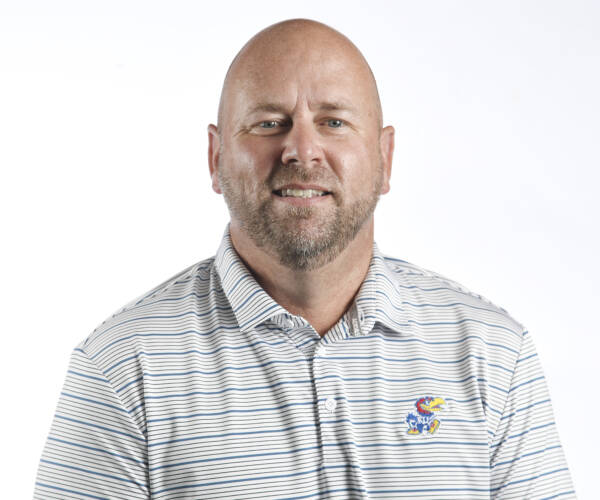 Chris Wilson joined the Kansas coaching staff in January 2016 as an associate head coach after spending the previous five-plus seasons at the U.S. Air Force Academy. Having been a coach for the last five seasons with the Jayhawks, Wilson has been a part of one National Championship appearance, four at-large bids to the NCAA Regionals and 41 top-five finishes.

Wilson and head coach Jamie Bermel had the Jayhawks in position for a fifth-straight NCAA Regional appearance during the 2019-20 season that was cut short due to the COVID-19 pandemic. The two coaches picked up right where they left off with the program, qualifying for the 2021 NCAA Tallahassee Regional and finishing in sixth place. The 2021-22 season also got off to a great start for Wilson and Bermel with the Jayhawks winning four-straight stroke play events and being ranked as high as ninth in the Golfweek/Sagarin Rankings and No. 11 in the Bushnell/Golfweek Coaches’ Poll.

Wilson was named one of the six finalists for the 2019 Jan Strickland Outstanding Assistant Coach Award presented by TaylorMade Golf Company as selected by the Golf Coaches Association of America. The Strickland Award is presented to the NCAA Division I, II, III, NAIA or NJCAA assistant coach that, among other things, has excelled in working with their student-athletes both on the course and in the classroom.

In short, Wilson’s addition to the Kansas men’s golf program has resulted in some of the most successful seasons in KU golf history – on and off the course. Team victories, individual medalists, postseason appearances, All-Americans and academic success are all on the rise within the Jayhawk program with the help of Wilson.

During Wilson’s time at Kansas, the Jayhawks have had nine GCAA All-America scholars, reached the postseason in every season possible, while producing nine team titles and seven individual titles.

In his first two years at Air Force, Wilson served as the assistant coach for the men’s golf team before being promoted to associate head coach in May 2013.

During his tenure with the Falcons, Wilson helped make significant strides to improve the program to new heights. With his knowledge and his 14 years of coaching experience at the collegiate level, the Falcons won six team titles and produced a golfer who qualified for the NCAA regionals in back-to-back seasons. Along with guiding the 2012-13 squad to a program record for average team score, which shattered the previous record by more than five strokes per round, three of the top-six individual scoring averages at Air Force came under Wilson’s watch.

Because of his success at Air Force, the Shawnee, Oklahoma, native was recognized in 2014 by his colleagues as one of eight semifinalists to be named to the Jan Strickland Award. This award not only acknowledges NCAA Division I, II, III, NAIA, or NJCAA assistant coaches who have demonstrated exceptional work with student-athletes on the course, but it recognizes those coaches who have excelled at working with student-athletes off the course as well.

Before joining the coaching staff at Air Force, Wilson served as the associate head coach at Coastal Carolina University for two seasons, where he was involved in the development of one All-American. While at Coastal Carolina, Wilson helped lead the Chanticleers to back-to-back Big South Conference titles. His duties with the Chanticleers’ program extended beyond the golf course, as Wilson served as the recruiting coordinator and handled many of the day-to-day operations, which included running the General Hackler Championship.

Prior to arriving at Coastal Carolina in the fall of 2008, Wilson spent four-and-a-half seasons at the University of Louisiana at Monroe (ULM), where he began his coaching career.  As the head coach for the men’s and women’s golf teams, Wilson led the Warhawks to a combined three tournament victories, 35 top-5 finishes, six individual medalists, 13 all-conference selections and six National Golf Coaches Association and Golf Coaches Association of America All-American Scholars.

While in charge at ULM, Wilson earned Southland Coach of the Year honors in 2006 after starting the women’s program from scratch. A coaching philosophy that he stresses, Wilson emphasizes academics, as exemplified by both the men’s and women’s team ranking amongst the top GPAs, on a consistent basis, in the athletic department on the ULM campus.

During his time at his alma mater, Wilson was involved in helping bring in one of the top-ranked recruiting classes in the country. That recruiting class would eventually earn seven all-conference awards and a 2004 Southland Conference Championship. As an undergraduate who earned his bachelor’s degree from ULM in 2001, Wilson was also a standout golfer, earning all-conference honors his senior year.

Before earning his bachelor’s degree from ULM, Wilson attended Dodge City Community College in 1996-97, where he also competed and earned an all-conference selection.