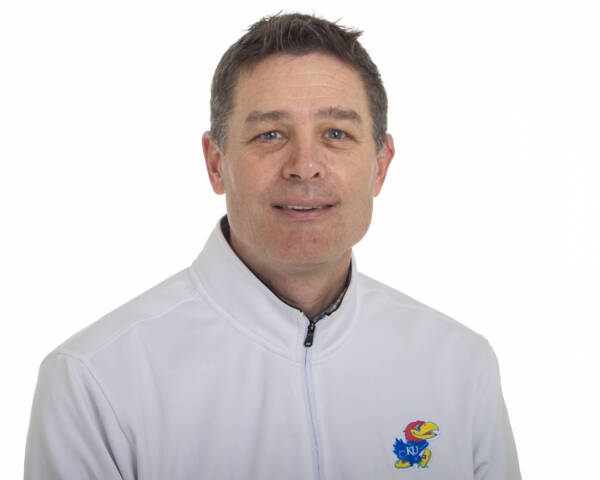 Paul Thornton will enter his fourth season with the Kansas track & field program during the 2021-22 seasons after being hired in September of 2018 by head coach Stanley Redwine as an assistant coach for the Jayhawk track & field squads where he will oversee the horizontal jumps and multi-event athletes.

In just his first year with the Jayhawks, the horizonal jumps took a big leap under Thornton, including Treyvon Ferguson’s 10th place finish at the NCAA Outdoor Championships in the triple jump, where the freshman jumped 16.18m (53-01 ft.) to earn second team All-American honors. From there, Ferguson went on to win the triple jump at the USATF U20 Outdoor Championships by leaping 16.13m (52-11 ft.) under Thornton’s guidance.

Thornton comes to Kansas after 10 years at Minnesota coaching the men’s sprinters, hurdlers, jumpers and multi-event athletes, the last two of which he held the title of associate head coach. In his decade with the Gophers, Thornton coached student-athletes to a total of 56 All-America honors and 16 individual Big Ten titles, including 2015 NCAA heptathlon champion, two-time First Team All-American and Minnesota school heptathlon record holder Luca Wieland. He was also heavily involved in developing the most decorated All-American in Minnesota program history, Harun Abda, who earned 13 All-America accolades as well as six Big Ten titles while also breaking six school records.

While with the Gophers, Thornton helped the team to three-straight Big Ten indoor titles from 2009-11, as well as back-to-back Big Ten outdoor titles in 2009 and 2010. During his second season in Minneapolis, Thornton was named the Midwest Region Men’s Assistant Coach of the Year by the U.S. Track & Field and Cross Country Coaches Association for the indoor season.

A native of Northfield, Minnesota, Thornton took the job with the Gophers track & field program after spending five years as the head men’s and women’s track & field coach at NCAA Division III power Washington University in St. Louis. While at the helm of the Bears program, he led the women’s team to a third-place finish at the 2008 NCAA Division III Indoor Track & Field Championships which helped earn him USTFCCCA Midwest Region Coach of the Year honors.

Washington won 14 University Athletic Association team titles, with the women’s team capturing UAA titles in nine of the 10 total championships under Thornton’s tutelage. The Bears swept the men’s and women’s UAA team titles three years in a row from 2005-07.

Thornton started his coaching career at Illinois State, first as a graduate assistant before being promoted to assistant coach and eventually associate head coach for four seasons (1996-2000), then moved on to St. Mary’s (Minn.), where he spent three seasons as the head men’s and women’s track & field coach before his time at Washington.

Before his coaching career began, Thornton was a three-time Minnesota Intercollegiate Athletic Association honoree as a member of the track & field team at St. Olaf College in Northfield, Minnesota. He helped the Oles’ 4×400-meter relay team to an NCAA Championships appearance in 1993 and was voted the team’s most valuable runner that season. Thornton earned four varsity letters in both cross country and track & field at St. Olaf while being coached by his father Bill.

Thornton earned a bachelor’s degree in sports science in 1993 from St. Olaf before earning a master’s degree in exercise physiology and biomechanics from Illinois State in 1995. He and his wife, Julie, have two children, Marissa and Zach.