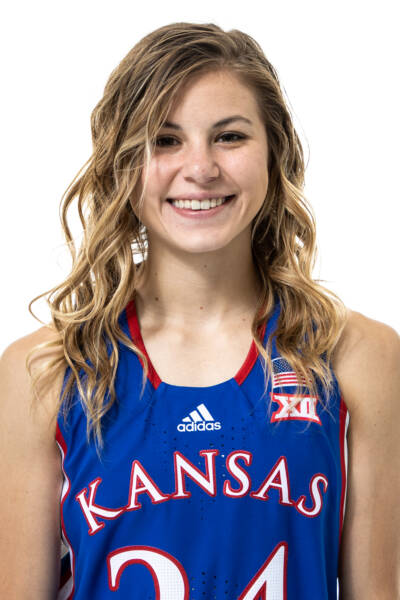 Prior to Kansas
Three-star prospect and the No. 25-ranked point guard in the class of 2022 by ESPN.com…Ranked No. 14 all-time in the state of South Dakota high school girls basketball history with 2,256 career points…First Team All-State selection and South Dakota Miss Basketball Candidate…Graduated as Winner’s all-time leader in career points, single-season points, career three-pointers and threes in a season…Second all-time in rebounds and assists at WHS…Earned Midco Player of the Week honors and was a two-time runner-up for the MidcoSN State Player of the Year award…Sanford Pentagon Player of the Year candidate and competed in the Sanford Pentagon All-Star Game…MVP of the 3-Class Shootout All-Star Game…Averaged 22.9 points, 7.9 rebounds, 2.7 steals and 2.5 assists per game as a senior…Member of teams that have won five conference championships, three regional championships and the 2019 Class A State Championship…Averaged 22.8 points, 8.2 rebounds, 3.7 assists and 3.1 steals per game as a junior…Mitchell Daily Republic Player of the Year in 2021…Three-time First Team All-State…Started varsity basketball in 7th grade at the age of 13…Coached by Larry Aaker at Winner HS…Has also competed on the Track & Field team…On the Honor Roll and Student Council…National Honor Society Historian…

Head Coach Brandon Schneider has announced a pair of additions to the Kansas Women’s Basketball program. Signing with the Jayhawks in the early signing period are Bella Swedlund and Zsofia Telegdy.