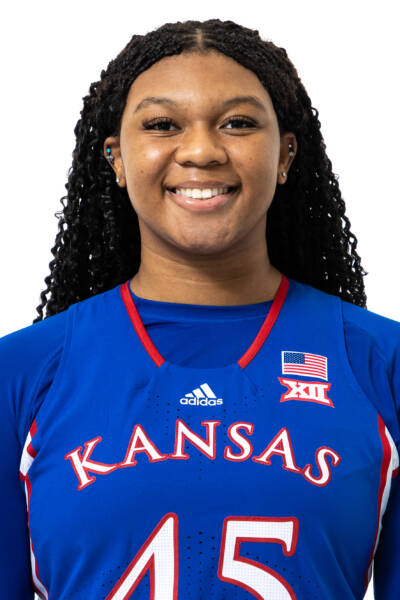 2021-22 (Junior)
Played in 11 games for the Jayhawks, averaging 3.2 minutes per game off the bench…Pulled down 13 rebounds and blocked one shot…Had a season-high four rebounds against Tennessee (Nov. 26) at the South Point Shootout.

2020-21 (Sophomore)
Played in 20 games and moved into the starting center role for nine contests…Shot an impressive 54.2 percent from the field…Pulled down 3.4 rebounds per game…Ranked second on the team with 18 blocked shots…Set a career-high in points with 10 against TCU and rebounds with 10 against Oklahoma State.

2019-20 (Freshman)
Named to the Academic All-Big 12 Rookie Team…Played in five games…Shot 50 percent from the field…First appearance of the year was against Indiana St. (Nov. 7).

High School
Prepped at Lawrence High School, earning letters in basketball…Ranked No. 23 for her position and No. 117 overall in the 2019 signing class by ESPN…Earned Second-Team All-Sunflower League honors…Averaged 11.9 points and 10.3 rebounds per game as a junior…Led LHS to a 17-5 record in 2017-18.