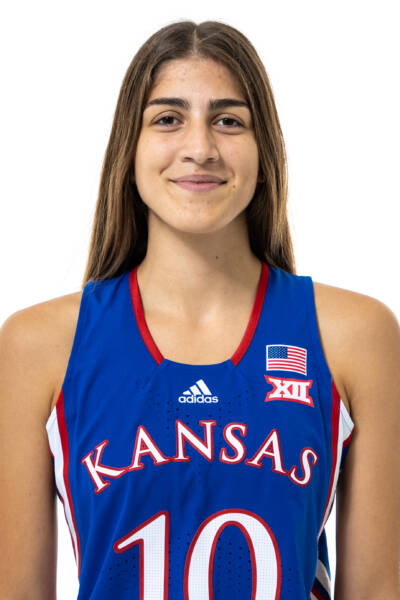 2022 Summer (FIBA U20 European Championships)
Competed for Greece in Group B of the tournament, played in Skopje, North Macedonia…Led her country to a fifth-place finish in the event…Led Greece and ranked third in the tournament with 18.3 points per game…Came just short of averaging a double-double, ranking fourth in the tournament with 9.9 rebounds per game…Scored at least 14 points in all seven games…Recorded four double-doubles: vs. Turkey (14 points, 11 rebounds), vs. Ukraine (19 points, 12 rebounds), vs. Israel (18 points, 13 rebounds), vs. Norway (16 points, 12 rebounds)…Put up a team-high 22 points and 7 rebounds in Greece’s 119-20 victory over Albania to open the tournament…Was joined on the Greece U20 team by Kansas teammate Danai Papadopoulou.

2021-22 (Sophomore)
Named to the Academic All-Big 12 First Team…Ranked third on the team with 9.9 points per game and second in rebounding with 5.6 per game…Had 15 double-figure scoring games, including a career-high 21 points at Baylor (Feb. 26)…Also scored 20 points against Baylor in Lawrence (Jan. 16)…Recorded her lone double-double with 15 points and 10 rebounds in the first round of the NCAA Tournament against Georgia Tech (March 18)…Grabbed 10 rebounds on two occasions, including at Oklahoma (March 5)…Ranked second on the team with 26 blocked shots…Shot 45.6 percent from the field and 77.9 percent from the free throw line…Also totaled 17 steals and 43 assists.

2020-21 (Freshman)
Named to the Big 12 All-Freshman Team…Earned back-to-back Big 12 Conference Freshman of the Week honors on Nov. 30 and Dec. 7…First Jayhawk with consecutive honors since the conception of the award in 2009…Eighth all-time selection for the Jayhawks and the first Kansas international player to receive honor…Led team in rebounds per game at 7.1, total offensive rebounds at 54 and blocked shots at 34…Played a total of 564 minutes through 22 games…Shot 45.4 percent from the floor and 74.5 percent from the free throw line…Recorded three double-doubles, including versus TCU in Phillips 66 Big 12 Tournament with 18 points and 10 rebounds.

Prior to Kansas
Blue Star Europe four-star recruit…Competed with the Greek National Team and Illioupolis GS, a professional team…Earned several FIBA Europe honors such as U18 and U16 first team and U16 Tournament MVP…FIBA silver medalist in 2019 with the Greek National team…Led the team in efficiency, rebounding and was the second-leading scorer all while being the youngest on her team.

I'm from Greece, and I'm a basketball player. Inevitably, a lot of people wanted to give me the "Greek Freak" nickname. Fair or not, the position commands attention and demands maturity.