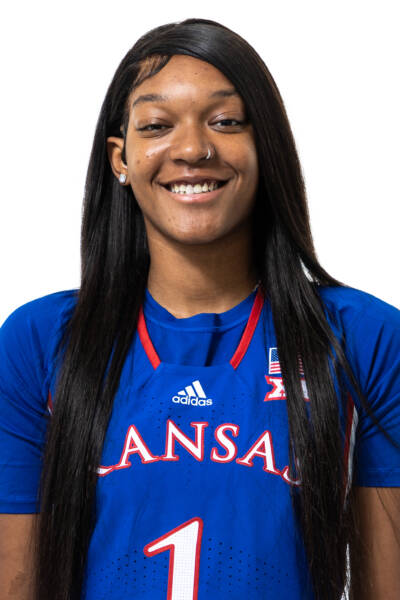 at Trinity Valley CC
NJCAA Region 14 Freshman of the Year

2021-22 (Junior)
Selected to Big 12 All-Defensive Team, becoming the first-ever KU player chosen to the team…Honorable Mention All-Big 12…Set a new single-season school record with 95 blocked shots…Ranked fourth in the nation in blocks…Recorded the No. 7 single-season mark in school history for field goal percentage, shooting 61.4 percent from the field…Helped KU set a new school record with 5.7 blocks per game…Blocked a career-high eight shots at Kansas State (Jan. 19), which is tied for third-highest single-game mark in school history…Led the Jayhawks with 8.7 rebounds per game and ranked fourth on the team with 8.9 points per game…Scored 10+ points in 12 games, including a career-high 18 against Oklahoma State (Feb. 2) and at Oklahoma (March 5)…Blocked at least two shots in 27-of-31 games…Pulled down a career-best 17 rebounds against TCU (Feb. 6).

Prior to Kansas
Played the forward position primarily for Trinity Valley Community College…Through her two seasons tallied 41 starts through 44 games played and averaged 7.2 minutes…Shot 58 percent from the field and 58.6 from the free throw line…Scored 10.3 points per game…Helped the Cardinals to a 22-3 overall record, 13-2 in conference play and a perfect 11-0 home record…Paced the Cardinals to 1,200 wins…Aided Trinity Valley CC to Region XIV Title..NJCAA Region 14 Freshman of the Year…Scored a triple double in the conference tournament

Senior center Taiyanna Jackson collected her second consecutive double-double and recorded her 100th career block as she led the Jayhawks to a 79-74 win over Texas-Arlington on Wednesday evening at Allen Fieldhouse.

Wayne and Greg Gurley are back with their first hand recap of the national title game. The guys chat about the ups and downs of the game, Bill Self's legacy and how awesome it was to see as many former players as there were in New Orleans. Rock Chalk!

Members of the 1971 Final Four team recently came back to Lawrence to celebrate their team. Wayne sits down with key members of the squad to chat about their chemistry, the Final Four run and their place in KU history.

There’s a lot of pressure when it comes to being a division one athlete. Preforming at a high-level day in and day out. Keeping up with your classes. Hearing the cheers…and occasional boo…from the fans. Taiyanna Jackson has endured all that and more as she was sought after to help change the culture on the KU women’s basketball team.

Being at KU is special. Throughout my career, I've played AAU basketball, went to a Junior College, and had the opportunity to attend many different schools later on in my career. Every chapter means a lot to me.

A dominant fourth quarter and a second straight double-double by junior Tayianna Jackson helped lead Kansas to a 75-60 win over TCU on Sunday afternoon at Allen Fieldhouse.