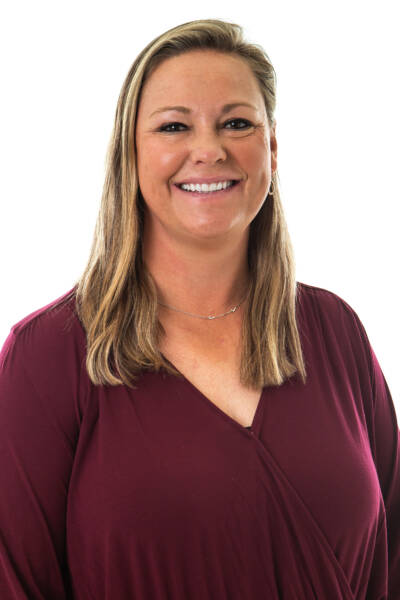 Seven-time conference coach of the year and seven-time conference champion Lindsay Hulwick Kuhle was named the head women’s golf coach at the University of Kansas on July 1, 2021 by Director of Athletics Travis Goff. She enters her second season with the Jayhawks in 2022-23.

In her first year at Kansas, Kuhle’s team finished the season No. 79 in the country by Golfstat, which was up nine spots from the average ranking the past five years. KU’s strength of schedule ranked of 53rd in the country in 2021-22. Her team set a program record with a 54-hole total of -1 at Westbrook Invitational in the spring 2022.

Kansas set multiple records in Kuhle’s inaugural season, including the most par or better rounds at five, the low 54-hole total at -1 at the Westbrook Invitational, the best par 5 scoring average (5.05) and

Kuhle Initiated the Coach Jerry Waugh Women’s Golf Endowment program, honoring the KU legendary coach and administrator. The endowment will be used to directly impact the student-athlete experience. It will create some new and exciting experiences for the team, like hosting tournaments, transportation, trips, and playing top courses around the country.

Kuhle and her staff recruited and signed seven players to play for KU in 2022, including student-athletes from England, Sweden, and Austria and Russia – who are on their women’s national team – and transfers from LSU and Chattanooga. All six signees ranked in top 800 in World Amateur Rankings. KU also inked future Jayhawks from Nebraska and California.

In her first season, Kansas finished ahead of numerous ranked opponents in tournaments including No. 22 Texas Tech, No. 23 Virginia Tech, No. 29 Oregon State, No. 49 Oklahoma and No. 50 Denver. KU finished seventh at the 2022 Big 12 Championship, which ties the second-best KU finish since 2014 when the team placed fourth and ended the year ranked 38th nationally.

Not only did KU show great improvement on the course, but the Jayhawks also excelled in the classroom in Kuhle’s first season. As a team, KU posted a program record 3.74 grade point average for the year and Its 3.79 GPA in the spring was a semester program high. All 10 women’s golf student-athletes were named to the Athletic Director’s Honor Roll recording a 3.50 or better GPA with five posting a 4.0 GPA.

A veteran coach who has coached more than 30 WGCA All-America Scholars and six individual conference champions, Kuhle came to Kansas after nine winning seasons as head coach at the University of Denver.

At Denver, Kuhle won seven conference team titles and the Pioneers qualified for the NCAA Tournament in each of the eight seasons where a postseason tournament was held.

With Kuhle as head coach, Denver won 11 team titles and had 10 individual tournament victories, which included six conference championship medalists. While at DU, she was named conference coach of the year seven times, including in 2020-21, in which DU ended the year ranked No. 39 by Golfstat/Golfweek. The Pioneers ended in the top 75 of the national rankings in all nine seasons with Kuhle at the helm.

Kuhle first joined the DU staff in 2005 and spent seven seasons with the program, including three as associate head coach. In 2012-13, Kuhle served as an assistant coach at Georgia before returning to DU for the 2013-14 season as the head coach.

Kuhle arrived at Denver to begin her coaching career after a successful college career at Tulane, where she was an all-conference performer all four years, including a first-team selection as a sophomore. She was also named Tulane Female Scholar-Athlete of the Year in 2005.

A native of Littleton, Colorado, Kuhle earned her master’s degree in sport and performance psychology from Denver in 2014 after earning a bachelor of science in management with a concentration in finance from Tulane in 2005.