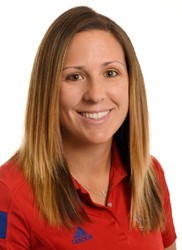 Katy (Heher) Nahm came to Kansas in July, 2011 as an assistant women’s golf coach. In July, 2017, she was promoted to associate head coach.

Prior to KU, Nahm spent two years as an instructor/coach at the Hank Haney International Junior Golf Academy in Hilton Head Island, South Carolina. One of her strengths is working with players on their short games.

A member of the Professional Golfers’ Association of America, prior to Hank Haney’s Academy, Nahm was an assistant coach at Coastal Carolina from 2007-09 and helped the team to a Big South Conference Championship in 2009.

Nahm played golf at Coastal Carolina and was a three-time All-Big South selection, as well as the league’s freshman of the year, in 2004. In her sophomore season the Lady Chanticleers won the conference team title and she was the individual runner-up.

Nahm was a four-time All-American Scholar, a two-time All-Big South Academic selection and played in a school-record 127 rounds.

She is married to Josh Nahm, a golf instructor at Firekeeper Golf Course in Mayetta, Kansas, just north of Topeka, and a former instructor at the Hank Haney International Junior Academy in Hilton Head, South Carolina.