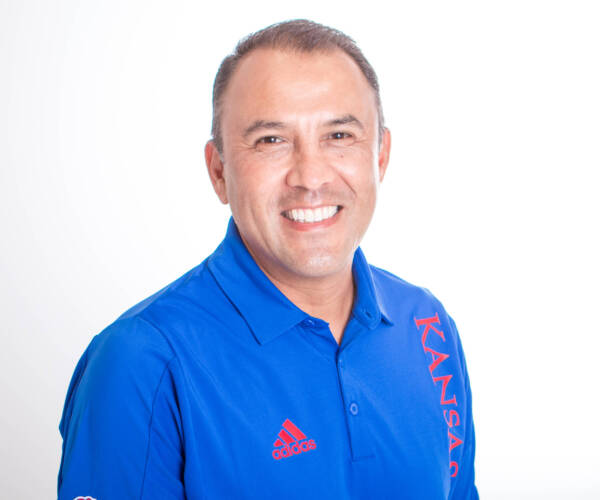 “I am very excited to welcome Guillermo on board to help lead this program and guide our student-athletes to success on and off the water,” said Cook-Callen. “He brings many years of experience and will partner with us to work towards the goals identified for the program. The work starts right away and I look forward to collaborating and achieving great things during his time at Kansas!”

With over 20 years of rowing coaching experience, Lemus comes to Kansas from Oklahoma where he served as the assistant rowing coach since August 2017. He assisted the Sooners to a second-place finish at the Big 12 Championships in 2018 and 2019, a third-place mark in the First Varsity Four in the San Diego Crew Classic in 2019 finishing ahead of Texas, California and UCLA. Lemus also facilitated academic success that helped a student-athlete to be named a Big 12 Scholar-Athlete, a pair of student-athletes to earn Big 12 Newcomer of the Year in 2018 and 2019 and an additional four to earn a spot on the All-Big 12 Conference list.

In 2014, he aided the Toreros of USD to the program’s first appearance at the NCAA Championships where they finished 15th overall. Under Lemus’ direct guidance, the novice eight won the Laurel V. Korholz Perpetual trophy at the 2015 San Diego Crew Classic.

Serving as the women’s juniors’ coach of the San Diego Rowing Club from 2007-11, many of the rowers under Lemus’ tutelage went on to receive NCAA Division I rowing scholarships. He also helped lead the crew to numerous appearances in Grand Finals at USRowing Club Nationals. Lemus guided SDRC to a third-place finish at the WLW4+ at the 2008 Youth National Championships.

From 2006-07, Lemus was the head juniors’ coach at the California Yacht Club. During those two years, he transformed what was a recreational junior’s program into a national contender. He led the CYC juniors to three grand finals, two petite final finishes at the 2007 Junior National Championships and a gold medal in the women’s double at the 2007 Club National Championship.

Lemus also coached at the Lions Rowing Club in Marina del Ray, California, where he established the club’s first competitive national-level master’s team. He coached the club to three gold and two silver medals at the 2006 Masters’ Nationals Championships. Lemus led the crew to a sixth-place finish in 2005 and a silver-medal finish in 2006 in the women’s club eights at the Head of the Charles Regatta.

With experience as a Division I assistant coach and Juniors head coach, Lemus has an extensive knowledge of the sport of rowing and is eager to start working and moving the Jayhawks rowing team to a NCAA appearance.

A native of Guatemala, Lemus began rowing at the age of 12 in Amatitlan, Guatemala. He graduated in 1990 with a degree in accounting and computer programming from the International Institute for Computer Studies in Guatemala City. Lemus holds a USRowing Level III coaching education certificate and has USRowing Advanced Coaching Series training.