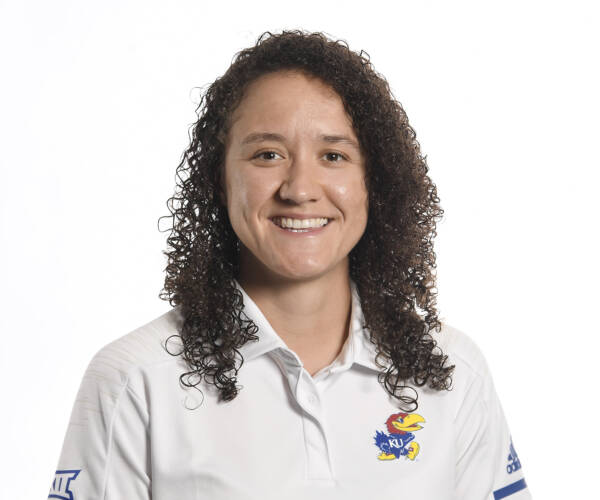 During the unprecedented 2020-21 season, Jackson helped lead the Jayhawks to a 6-4-3 overall record. In the fall conference season, KU finished with a 5-3-1 record and saw its highest ranking in program history after being ranked fifth by the United Soccer Coaches poll.

A native of London, England, Jackson went to Boca Raton from the University of Idaho, where she spent four seasons on the coaching staff. She helped to lead the Vandals to back-to-back Big Sky regular-season titles in her last two years, which included an undefeated conference mark in 2015 (9-0-1), followed by the squad going 7-1-2 in 2016. Overall, Idaho was 24-9-7 during that span, and their 2015 record compared to the season prior was most improved in the NCAA.

Jackson has continued her own playing career, seeing time with Jamaica’s 26-person provisional squad for the 2019 FIFA Women’s World Cup. So notched international caps in Jamaica’s matches vs. Chile, South Africa and Panama.

Jackson began her collegiate playing career at Syracuse and finished it at Iona, where she was twice named All-Metro Atlantic Athletic Conference and was team captain and a MAAC All-Tournament team member in 2012. She also student coached at Iona before making the move to Idaho, and has experience with both goalkeepers and field players. In 2016, she gained entry into the NSCAA’s prestigious “30 Under 30” program, identifying the top young soccer coaches nationwide.

Prior to her collegiate playing career, Jackson was a member of the Watford club team in the English Premier League, as well as part of the Arsenal Youth Academy. In addition to her college coaching experience, she has also coached club soccer with Moscow United/Quad City Fusion and Idaho Elite Soccer Academy.

Jackson earned her master’s degree in neuroscience from Idaho and also attained a doctorate in exercise science from the school in 2018. She received her undergraduate degree in biology from Iona, and twice while at Syracuse, made the athletic director’s honor roll.

She has earned US USSF C License as well as a Premier Diploma and Advanced National GK licenses from the United Soccer Coaches.