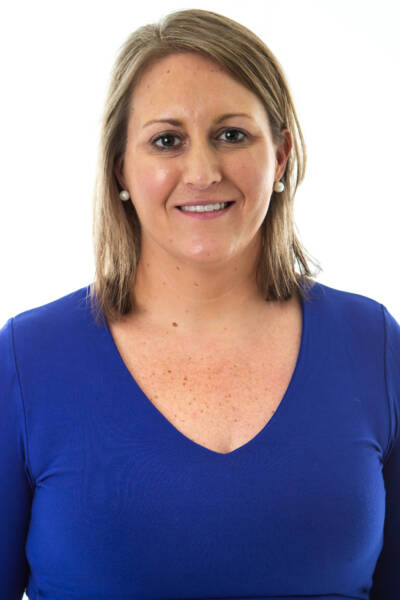 Jen Betz finished her 18th season with the Kansas swimming and diving team in 2021. She helps Clark Campbell with coaching duties as well as is in charge of recruiting potential student-athletes and directs swim camps hosted by Kansas swimming in the summer.

Jen Betz knows exactly what life is like balancing intense pool workouts with school and social life, being a former Jayhawk swimmer herself. Since joining the KU team as an assistant coach in 2003, Betz has established close relationships with the swimmers and led strong recruiting efforts for the team. She knows what it takes on a daily basis to be successful both in and out of the pool, helping the team achieve a GPA of 3.0 or higher and recognized by the College Swimming Coaches Association of America (CSAA) achieving Team Scholar Awards for each of the last 36 semesters. This included a program-best 3.70 GPA during the 2018-19 spring semester, which was the highest in the Big 12 and the second highest amongst Power Five institutions.

During the 2020-21 season, Betz helped the program to its fourth-consecutive second-place finish at the Big 12 Championships with a final team score of 649 points.

At the 2020 Big 12 Championships, she helped lead the team to a Kansas program record scoring 831 points for a second-place finish.

During the 2019 Big 12 Championships, she helped lead the team to a second-place finish, and a, at the time, program-record 754.50 points. Betz aided the team to a 8-1 dual meet record as well.

In 2016, Betz was a finalist for CollegeSwimming’s Assistant Coach of the Year Award. She earned the recognition after she helped lead KU to 650.50 points at the Big 12 Championships. On the deck, Betz helped mentor Chelsie Miller to NCAA All-America First Team honors at the 2016 NCAA Championship.

Her career at KU began in 2003 as she took the position of assistant coach and head recruiting coordinator under Campbell. She was a student assistant under former KU head swim coach Cathy Burgess during the 2000-01 season. In her first season, she assisted the Jayhawks to a 9-3 season and a third-place finish at the Big 12 Championships.

Former head swimming coach and assistant athletic director Gary Kempf recruited Betz to swim for Kansas. Betz competed in the backstroke and the freestyle events. She was a seven-time scorer at the Big 12 Championships during her four years as an athlete at KU from 1996-2000.

After graduation, the Mansfield, Ohio native joined the full-time staff of Athletes in Action (AIA), a Christian sports organization that helps student-athletes throughout the country. AIA sent her to the University of Virginia where she became a volunteer assistant under head coach Mark Bernardino and worked with the men’s and women’s swimming teams. Both teams finished top 10 in the NCAA.

Betz was married to Tate Betz in November 2015 and is the mother to three children. The family currently resides in Olathe.