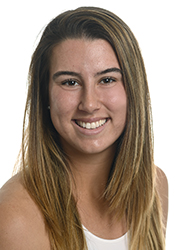 Spring 2018 (Redshirt Freshman): Ended her first year of competing with a 5-14 overall singles record … Went 2-4 in dual matches with one win coming at the No. 5 position and the other on court six … Named to the 2018 Academic All-Big 12 Second Team … Compiled an overall doubles mark of 8-11, including 5-4 in dual play with Janet Koch … The duo upset the No. 76-ranked duo in KU’s NCAA Tournament second-round match against No. 12 Pepperdine … The defeat was a career-high against an opponent for Policare.

High School: Signed during the 2016 early signing period … Graduated high school in December 2016 … A five-star signee who was ranked No. 1 in New York by Tennisrecruiting.net and No. 2 in the Middle Atlantic region … Earned the No. 1-ranking in the Eastern Section in 14’s and 16’s and under … At the time of her signing, she was No. 27-ranked player in the United States in her class and has been ranked as high as No. 16 in the country.