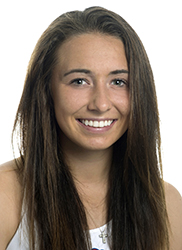 Spring 2019: Compiled an overall singles record of 18-2 during her senior season, including a 5-2 record against nationally-ranked opponents… Teamed up with Sonia Smagina for an overall doubles record of 16-5 at the No. 2 position… Named to the Academic All-Big 12 Second Team… Named a First-Team All-American… Named the ITA Central Player of the Year… Named to the All-Big 12 Singles First Team and All-Big 12 Doubles First Team… Named the co-Big 12 Player of the Week twice (Jan. 29 and Feb. 26) during the season… All-Big 12 Tournament Singles Honors at the No. 1 position…  Named the All-Big 12 Tournament No. 2 Doubles Team… Earned an automatic bid for the NCAA Tournament after being named First-Team All-American by virtue of seeding … Advanced to the Singles Round of 16 at the NCAA Individual Championships.

Spring 2018 (Junior): Ended her junior season with an 18-3 overall singles record, including 8-1 in dual matches at the No. 1 spot … Went 11-2 against nationally-ranked opponents … Named to the All-Big 12 Singles First Team and the 2018 Academic All-Big 12 Second Team … Reclaimed the No. 1 ranking on February 20 … Held a spot in the nation’s top-10 all season … Named the ITA Player to Watch … Earned an at-large bid to compete at the NCAA Division I Singles Championships … Tallied an 18-4 doubles record … Paired with Nina Khmelnitckaia to go 15-4 in doubles, with dual matches accounting for a mark of 8-2 at the No. 1 spot … Earned a career-high win over a ranked opponent after defeating Oregon’s No. 10-ranked Alysa Tobita and Shweta Sangwan with Khmelnitckaia … Ranked as high as No. 12 in the doubles poll with Khmelnitckaia, a career-best for Rychagova … Named to the All-Big 12 Doubles Second Team alongside Khmelnitckaia … Invited to compete at the NCAA Division I Doubles Championships with Khmelnitckaia … Missed the last 10 matches due to injury.

Spring 2017 (Sophomore): Tallied an impressive 25-8 overall singles record at the top spot, including going 14-4 in spring play … Went 5-3 against ranked opponents with eight other matches going unfinished … Named to the 2017 All-Big 12 Singles First Team and the Academic All-Big 12 First Team … Paired with Tess Bernard-Feigenbaum, Tatiana Nikolaeva, Janet Koch and Maria Toran Ribes to post a 25-11 record, including a 16-8 spring mark … Began the spring paired with Koch at the No. 2 spot for a 4-5 record … In February, moved to play with Toran Ribes at the No. 3 spot where the duo went undefeated at 8-0 … Finished the season with Koch at the No. 2 spot and a 7-5 record … Contributed to the team’s second-consecutive NCAA Championship invitation with a win on court one for KU.

Fall 2016 (Sophomore): Picked back up where she left off in the spring with an 11-4 singles mark and a 4-1 record against Big 12 competition … Opened the fall 2016 campaign with three-straight wins at the Little Rock Invitational and claimed the title of Champion of Flight A Singles … Was one of four Jayhawks to compete at the ITA All-American for the first time since 2007, played both singles and doubles … Recorded five wins in a row at the ITA Central Regional, but was bumped out at the semifinals … Teamed up with Janet Koch to go 3-0 in doubles play at the Notre Dame Fall Invitational to close out the season … Matched up with Koch, Tess Bernard-Feigenbaum and Tatiana Nikolaeva to post an impressive 9-3 doubles record … Competed at the Little Rock Invitational, ITA All-American, ITA Central Regional and Notre Dame Fall Invitational.

Spring 2016 (Freshman): Put together an impressive freshman season as she was tabbed All-Big 12 First Team, Big 12 Freshman of the Year, Big 12 All-Freshman Team and ITA Central Region Rookie of the Year … Concluded her freshman season with a 21-3 record in doubles, playing with both Smith Hinton and Maria Jose Cardona … Competed with Hinton to win 15-straight matches in doubles play to open the dual-match season … Went 16-5 in singles, including a 10-3 mark against Big 12 opponents … Helped lead KU to its first appearance in the Big 12 Championship semifinals since 2002 … Contributed to the team’s first NCAA Championship invitation in 17 years.

Fall 2015 (Freshman): Had an outstanding fall season to open her KU career by posting the best singles mark of any Jayhawk at 11-4 … Recorded wins in all three of her matches at the Purdue Invitational … Finished as the singles runner-up at the ITA Central Regionals … Collected six-straight wins at the ITA Central Regionals before falling in the title match … Selected to compete at the USTA/ITA National Indoor Intercollegiate Championship, the first Jayhawk to be tabbed for the prestigious singles field since the ITA began sponsoring the event in 2005 … Competed with Janet Koch and Hinton to post an 8-3 mark in doubles … Competed at the Little Rock Invitational, Purdue Invitational, ITA Central Regionals and the USTA/ITA National Indoor Intercollegiate Championships.