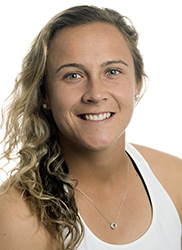 Spring 2018 (Junior): Ended her third season with an even 19-19 overall mark in singles … Went 9-13 in dual matches, playing at the No. 2 and 3 positions … Earned a career-high win against Texas Tech’s No. 41 Felicity Maltby … Teamed up with Maria Toran Ribes, Tatiana Nikolaeva and Amber Policare for an overall mark of 15-18 … Ended dual play competing with Policare at the No. 2 spot … The duo upset the No. 76-ranked duo in KU’s NCAA Tournament second-round match against No. 12 Pepperdine … The defeat was a career-high against an opponent for Koch.

Fall 2017 (Junior): Tallied a 9-4 singles record, including a 1-1 mark against ranked opponents … Started the fall season with six-straight wins … Ended the fall season as the No. 90-ranked player in singles … Played doubles with Maria Toran Ribes to end with a 5-7 mark … Participated at the Rice Invitational, ITA Central Regional, Kansas Invitational and LSU Invitational.

Spring 2017 (Sophomore): Wrapped up her sophomore season with a 16-18 overall singles record … Paired with Nina Khmelnitckaia, Anastasia Rychagova and Tatiana Nikolaeva to post an overall doubles record of 17-16 … Began the spring paired with Rychagova at the No. 2 spot and went 4-5 … Stayed at the No. 2 spot and played with Nikolaeva until April to tally a 7-5 record … Paired back up with Rychagova for the remainder of the season to go 4-3.

Fall 2016 (Sophomore): Went 7-5 in singles play … Was one of four Jayhawks to compete at the ITA All-American for the first time since 2007, played both singles and doubles … Went 3-0 in singles and paired with Anastasia Rychagova to go 3-0 in doubles at the Notre Dame Fall Invitational to close the season on a high note… Teamed with Rychagova, Nina Khmelnitckaia and Tatiana Nikolaeva to post a 6-6 doubles record … Competed at the Little Rock Invitational, ITA All-American, ITA Central Regional and Notre Dame Fall Invitational.

Spring 2016 (Freshman): Finished the season with a 14-8 singles record … Went undefeated in her first five singles matches … Posted an 11-9 doubles record playing with Nina Khmelnitckaia on court one … Contributed to the team’s first NCAA Championship invitation in 17 years, picking up a singles win on court three for KU.