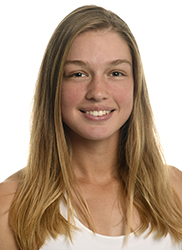 Spring 2019: Tallied an overall singles record of 17-8 at the No. 4, 5 and 6 positions… Teamed up with Janet Koch in doubles and the duo notched an overall record of 18-1 at the No. 1 position… Reached the No. 1 doubles ranking in the country by the Intercollegiate Tennis Association (April 2)… Academic All-Big 12 First Team… Named First-Team All-American… Named to the All-Big 12 Singles Second Team and All-Big 12 Doubles First Team… All-Big 12 Tournament Singles honors at No. 5 position… Named the All-Big 12 Tournament No. 1 Doubles Team… Earned an automatic bid for the NCAA Tournament after being named First-Team All-American by virtue of seeding… Advanced to the Round of 16 in doubles with partner Janet Koch in the NCAA Individual Championships.

Spring 2018 (Junior): Completed her junior season with a 22-9 overall singles mark, with dual matches accounting for a 13-5 record … Went 6-1 in matches against Big 12 opponents … Named to the 2018 Academic All-Big 12 First Team … Clinched four matches, including wins that snapped KU’s 11-match losing streak to Tulsa and 13-match losing streak to Texas Tech … Earned her highest ranked win over an opponent March 25 against TCU’s No. 84 Aleksandra Zenovka … Finished with a 20-15 overall doubles record … Went 15-4 this season with Anastasia Rychagova and 8-2 in duals at the No. 1 spot … The tandem was ranked as high as No. 12, a career-best for Khmelnitckaia … Named to the All-Big 12 Doubles Second Team with Rychagova … Invited to compete at the NCAA Division I Doubles Championships alongside Rychagova … Contributed to the team’s first NCAA Tournament win in 19 years with a singles win on court three.

Fall 2017 (Junior): Notched a 7-3 singles record, including a 1-1 mark against ranked opponents … One of three Jayhawks to compete at the Riviera/ITA Women’s All-American, participated in doubles … Swept the Kansas Invitational with three singles and three doubles wins … Ended the fall season ranked as the No. 112 singles player … Paired with Anastasia Rychagova to post a 7-2 doubles mark … Teamed up with Tatiana Nikolaeva for a 2-1 record … Finished the fall season as the No. 38-ranked doubles team with Rychagova … Participated at the Riviera/ITA Women’s All-American, ITA Central Regional, Kansas Invitational and LSU Invitational.

Spring 2017 (Sophomore): Finished her sophomore year with an overall singles mark of 18-9, including 12-5 in spring play … Named to the 2017 Academic All Big-12 Second Team … Paired with Janet Koch, Maria Toran Ribes and Tess Bernard-Feigenbaum for an overall doubles mark of 23-15, including 16-8 in spring play … Teamed up with Bernard-Feigenbaum at the No. 1 spot to tally a 22-11 record … The doubles team was named to the All-Big 12 Doubles Second Team … The duo climbed as high as No. 19 in the national rankings, marking Khmelnitckaia’s highest doubles ranking of her two-year career … The duo became the first KU pair to earn an at-large berth to the Division I Women’s Tennis Championship since 1998 …  At the event, the doubles team earned a career-best win against a ranked opponent in Mississippi State’s No. 2 overall seed Jasmine Lee and Lisa Marie Rioux … Contributed to the team’s second-consecutive NCAA Championship invitation with a win on court four for KU.

Fall 2016 (Sophomore): Tallied a 6-4 singles record with a 2-1 mark against Big 12 opponents … Was one of four Jayhawks to compete at the ITA All-American for the first time since 2007, competed in doubles … Closed out the season with three-straight wins at the Notre Dame Fall Invitational … Paired with Tess Bernard-Feigenbaum to collect five-straight wins at the ITA Central Regional before falling in the title match … Competed with Bernard-Feigenbaum, Maria Toran Ribes and Janet Koch to post a 7-7 doubles record with a 2-2 record against Big 12 competition …  Participated at the Little Rock Invitational, ITA All-American, ITA Central Regional and Notre Dame Fall Invitational.

Spring 2016 (Freshman): Wrapped up her freshman year with a 15-8 singles record, including a win on court four at the NCAA Championship on her way to earning a spot on the Big 12 All-Freshman Team … Posted an 11-9 doubles record overall playing with Janet Koch, and a 6-4 doubles record in Big 12 play … Contributed to the team’s first NCAA Championship play in 17 years.

Fall 2015 (Freshman): Finished her first semester at KU with an impressive 10-4 singles record … Picked up wins in her first three matches at the ITA Central Regionals … Collected two singles wins at the Texas Tech Invitational to close the fall season on a high note … Matched up with Smith Hinton, Maria Jose Cardona and Koch to post a 7-5 ledger in doubles … Saw action at the Oklahoma Invitational, ITA Central Regionals, Robert Alison Fall Classic and the Texas Tech Invitational.

High School: Ranked in the Top 40 of the Russian National 18 and Under Rankings … Ranked as high as No. 564 by the International Tennis Federation … Reached the semifinals of both the Grade 5 Alatan Tour Cup singles draw and Kazan Professional Tournament doubles draw … Graduated from School of Mytishchi #8.