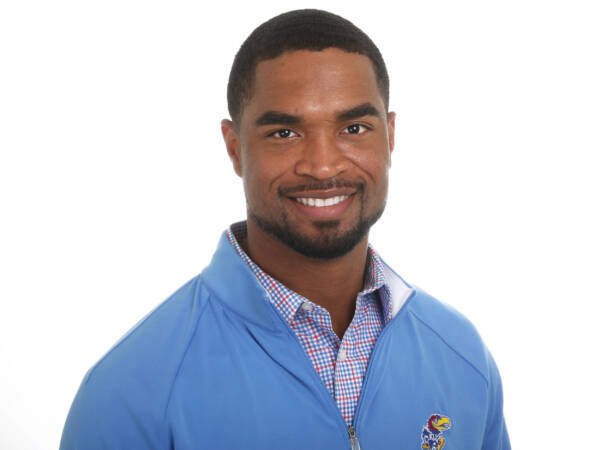 Darrell Stuckey, one of the most decorated players in Kansas Football history, is returning to the program as Director of Football Relations, it was announced in March of 2021.

Stuckey, a football letterwinner from 2006 to 2009 and a member of the program’s Ring of Honor, will focus on building and continuing relationships with football alumni, high school and junior college coaches and members of the community, while also working with current football student-athletes on personal development.“I came back to give back to a place that deeply invested in me,” Stuckey said.

“Through opportunity and education, I was empowered to be more than just an athlete here. I am compelled to help our student-athletes maximize their opportunities through self-discovery and preparation. I look forward to representing the Kansas Football program to our alumni base, which I’m a proud member of, and the entire Jayhawk community. I am also excited to share with the high school and junior college coaches in this region why the University of Kansas is such a special place. I am very appreciative for the opportunity to return to a place I have so much love for.”

Stuckey, a native of Kansas City and a product of Washington High School, had a standout on-field career for the Jayhawks. He earned All-Big 12 first-team honors in 2008 and was an honorable mention selection in 2007 and 2009. The strong safety started 42 games over his four-year career and served as a team captain as a senior in 2009.

His 295 career tackles are the second-most ever by a Kansas defensive back. His eight career interceptions rank tied for 10th-most in program history and his five picks in 2008 are tied for the ninth-best single-season mark in Kansas history.

As accomplished as Stuckey’s career was on the field, it was his presence off the field that made him stand out even more. In addition to serving as a team captain, he was a Big 12 Community of Champions member and was most of the most active student-athletes involved in community service throughout his career. He earned the Nolan Cromwell Leadership Award –along with quarterback Todd Reesing – after his junior year, and was a member of the AllState Good Works Team.

Stuckey, who was officially inducted into the Kansas Football Ring of Honor in 2019, also earned the prestigious Big 12 Men’s Sportsperson of the Year award in 2010. He was selected because he displayed an extraordinary degree of sportsmanship and community service.