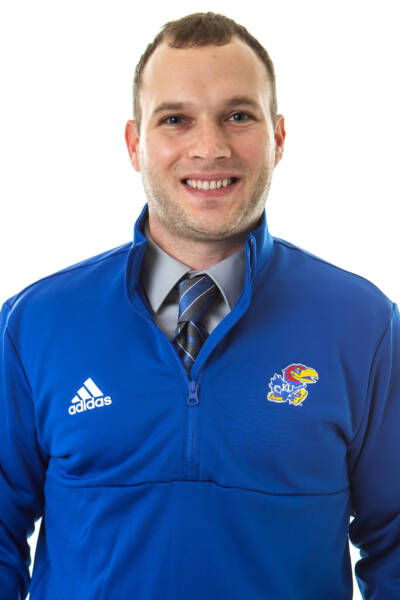 Doug Self is in his first year at Kansas after joining the staff as an Assistant Communications Director in September 2021. He will serve as the primary media contact for the Jayhawk Women’s Basketball, Tennis and Rowing programs and assist with the communications efforts for the rest of the athletic department.

Self comes to Lawrence following eight and a half years at Southwestern Oklahoma State University, where he served first as the Sports Information Director and later as Assistant Athletic Director for Media Relations. While at SWOSU, he was the primary media contact for all 13 of the department’s intercollegiate athletic programs.

In 2017, Self was selected as the Grant Burger Media Award winner for the NCAA Division II SID category by the American Volleyball Coaches Association (AVCA). The award is an honor intended to recognize members of the media who have been involved in the advancement of the sport of volleyball through consistent coverage in all mediums. In addition, Self has garnered eight awards from the Oklahoma College Public Relations Association (OCPRA) in the categories of Sports Writing and Best Headline.

Prior to SWOSU, Self worked as the Media and Public Relations Coordinator for the Valero Alamo Bowl during the 2012 bowl season and he has returned to the event in a volunteer capacity each season since. Self has also volunteered to work other events, including the NCAA Division I Men’s Basketball opening rounds in Austin, Texas, during the 2013 season and the 2018 Final Four, held at the Alamodome. He has also assisted with media relations at three NCAA Division II National Championship football games in Kansas City.

Self got his start in communications at Fort Hays State University, spending three years as an undergraduate intern and graduate assistant in the Sports Information Department. While at FHSU, he was the main contact for the Tiger volleyball, women’s basketball, tennis and softball teams while serving as the secondary contact for all other FHSU athletic programs. He earned national acclaim for a pair of publications he produced while at Fort Hays State, as the 2011 FHSU volleyball media guide was selected as Best in the Nation by CoSIDA and the 2011-12 Lady Tiger basketball media guide finished fifth in the nation.

A native of Valley Falls, Kan., Self holds two degrees from Fort Hays State. He received his bachelor’s degree in Recreation and Sports Management in May 2010 before finishing his master’s degree in Sports Administration in May 2012.