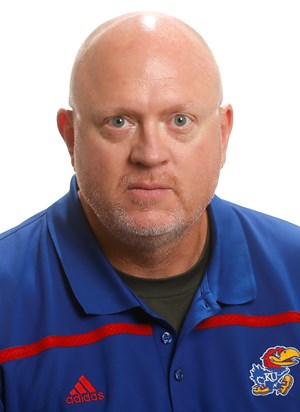 John Baumann joined the Kansas track & field/cross country staff in July of 2015 as the head strength and conditioning coach. In his position he is charged with implementing and teaching student-athletes how to use the weight room to become better at their chosen events in track & field. Baumann is a member of both the NAIA Hall of Fame and the Hall of Fame at his alma mater, Doane College.

Prior to coming to Lawrence, Baumann spent 10 seasons as the throws coach at Oklahoma State University. He also provided assistance in the sprints, jumps and weight programs. While in Stillwater, the Cowboys and Cowgirls enjoyed immense success, with the men’s cross country team winning three NCAA titles, the men’s track & field team winning the 2014 Big 12 Indoor Championship and finishing second in the 2014 Men’s Program of the Year standings.

Before his tenure at Oklahoma State, Baumann had a stellar career coaching the field events at Illinois from 1993-95, then again from 1998-2003, where he helped guide his student-athletes to school records in the hammer, discus and the weight throw. He also helped the Illini win the 1994 Outdoor Big Ten Championships and finish fourth at the 1995 NCAA Indoor Championships.

Prior to coaching, Baumann enjoyed a highly successful collegiate playing career. He started his career at the University of Nebraska, where he redshirted in football and track. He then transferred to Doane College in Crete, Nebraska where he was a member of Doane’s football and track teams. He played four different positions in football and was a four-year offensive starter.

Baumann earned his B.S. in physical education from Doane in 1990. Baumann and his wife, Lisa, have three daughters, Catabrean, Holly and Sadie, and one son, Max.