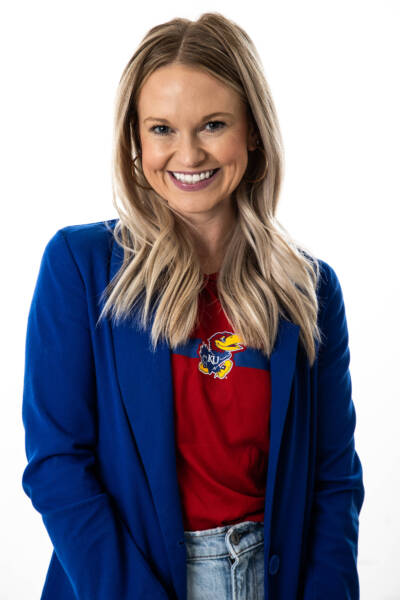 Kansas Athletics announced the hiring of Katie Burris as the head Rock Chalk Dance team coach at the University of Kansas in January of 2022.

Katie’s enthusiastic attitude and passion for dance began at the young age of two. Katie was a featured performer touring Austria, Germany, and Italy, has performed at Disney and Miss America Events, and many opening numbers for national competitions. In addition, she has assisted choreography in several nationals’ routines for university level programs.

Katie was a top performer for her high school cheer/dance squad for four years and for Emporia State University’s Stinger Dance Team for two years. During college she had the opportunity to dance in commercials and music videos while living in LA.  Upon returning to the Kansas City area, she became a Kansas City Chiefs Cheerleader for 4 years (2008-2012) acting as co-Captain and receiving awards such Rookie Performer of the Year, Veteran of the Year, and Pro Bowl nominee. Throughout her years as a Chiefs Cheerleader she was given the opportunity to perform in the “Variety Show” for several military bases throughout the US, Iraq, and Kuwait.

Katie continues her passion of dance through her choreography where she has wonmany awards. Since 2012, she’s choreographed routines and productions for the KC Chiefs Cheerleaders. She spent the past ten years as a High school dance coach at Blue Valley High School leading them to impressive national and state rankings.

Currently, Katie works as an exercise physiologist, teaches dance at LeDance Studio, and is eager to begin her journey as the Head Rock Chalk Dance Coach. Her favorite things include: photography, shopping, blogging/influencer, laughing with friends, and spending time and traveling with her husband Aaron and two children Posey (7) and Musial (2).