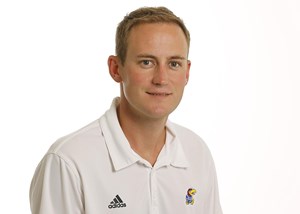 In addition to his duties as general manager and director of tennis at the Jayhawk Tennis Center, Kyle Markham stepped up and spent the spring of 2015 as an assistant coach for the Kansas women’s tennis program. At the conclusion of the 2015 campaign, Markham returned to his regular duties as KU hired Caroline Lilley to serve as assistant coach on a permanent basis.

A Wichita, Kansas, native, Markham won the 5A singles state tournament for Goddard High in 2001. He holds the career match record with 132 singles wins.

He is a graduate of the University of Iowa and competed for the Hawkeye Tennis Team in the No. 2 singles and No. 1 doubles positions. Following his collegiate career, Markham co-founded Kansas City United Tennis, which managed the Plaza Tennis Center and also consisted of a high-level junior academy.

Markham has extensive experience training high-performance juniors as well as managing tennis facilities. He coached numerous nationally ranked junior players and traveled internationally to coach at ITF tournaments. Many juniors that he has coached have received scholarships to play tennis at Division I, II and III schools. Markham also served as the men’s and women’s assistant tennis coach at Johnson County Community College in 2010.

He is a certified USPTA Professional 1 coach. Markham’s wife Britney received her undergraduate and master’s degree in Speech-Language Pathology from the University of Kansas. Markham and his wife, Britney, have two children, Wyatt and Miles.