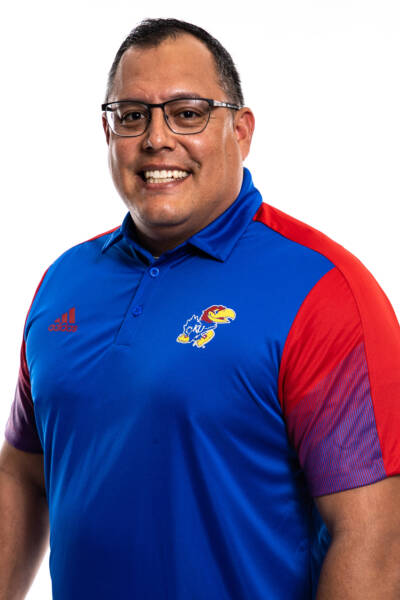 Oscar Rodriguez, Jr., joined the Kansas football staff under head coach Lance Leipold in February of 2022 as an analyst with the Jayhawks’ defense.

Rodriguez came to KU following three seasons at Akron, where he served as the Zips’ inside linebackers coach. He was elevated in the summer of 2021 to associate head coach before being tabbed as the interim head coach on Nov. 4, 2021.

Previously, Rodriguez was the defensive coordinator for three seasons at the University of La Verne (Calif.) where he was the 2017 NCAA Division III AFCA National Assistant Coach of the Year.

Rodriguez orchestrated a Leopards’ defense that led the SCIAC in defensive touchdowns and tied for second in sacks in conference play. The Leopards allowed just 383.3 yards per game, the fewest in the conference.  La Verne ranked third in its league in forced turnovers with 10 and rushing yards allowed per game at 155.2.

After going 2-7 the season before Rodriguez’s arrival, the Leopards went a perfect 7-0 in SCIAC play in 2015.  They claimed their first SCIAC championship since 1995 and made the NCAA National Championship for the first time since 1994.

Rodriguez built an impressive resume as an assistant coach, including eight seasons as a college defensive coordinator, before La Verne. All totaled, Rodriguez mentored six All-Americans and 33 all-conference players across almost all levels of college football. In addition, he coached seven players who eventually made their way to the NFL.

Prior to Garden City, Rodriguez was the associate head coach and defensive coordinator for NCAA Division II Emporia State (Kan.) University.  There he mentored two All-Americans and 11 All-Mid-America Intercollegiate Athletic Association (MIAA). Emporia State was ranked in the top-five in the MIAA in all defensive categories in 2011-13.

At Hutchinson (Kan.) Community College from 2010-11, Rodriguez tutored eventual NFL players Markus Golden, Meshak Williams and Cordarrelle Patterson to All-American seasons while serving as a co-defensive coordinator and associate head coach. During Rodriguez’s time at Hutchinson, the school was ranked in the top-10, nationally, in every defensive category.

As a co-defensive coordinator at NAIA Baker (Kan.) University from 2008 to 2010, Rodriguez helped lead the program to its first playoff appearance and first back-to-back winning seasons in 15 years, while helping the team achieve a national ranking as high as 12th.

Rodriguez got his first coaching position at Randall (Texas) High School as the defensive backs coach in 2005.  He earned his first college assignment at Washburn (Kan.) University where he worked with future NFL players Cary Williams, Terrell Fletcher and Michael Wilhoite.

Rodriguez is active off the field and in the community as well. A two-time cancer survivor, he founded the Coaches Against Cancer Foundation which raises money annually with donations, silent auction, and golf tournament for people with cancer that need assistance financially for lodging, travel, medical bills, medication.

A native of Liberal, Kan., Rodriguez played at Fort Hays State University, Coffeyville Community College, and Emporia State as a safety. He earned a bachelor’s degree in physical education/health From Fort Hays in 2005.  Rodriguez earned a master’s degree from Washburn University in educational administration in 2008.

Rodriguez was a NFL Bill Walsh Fellowship participant in 2018 with the Chicago Bears.

Rodriguez, 37, and his wife Lauren have three children– Joey, Victoria, and Nathan.