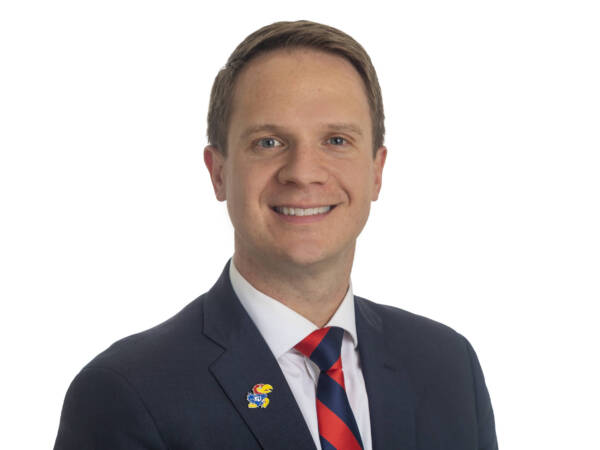 Travis Goff, named a Next Up honoree by CollegeAD in 2018 and one of Sports Business Journal’s “Power Players in College Sports” in 2019, was named Athletic Director at the University of Kansas by Chancellor Douglas Girod on April 5, 2021.

A Kansas graduate with deep roots in his home state, Goff, a seasoned college athletics administrator and program builder who prioritizes relationships with student-athletes, staff, alums and fans, returns to his alma mater to lead the Jayhawk athletic department.

Goff arrives back at Kansas from Northwestern, where he has served as Deputy Athletic Director/Assistant Vice President for the Wildcats since 2012. Some of the department’s notable accomplishments during his time as an administrative leader there include:

A Dodge City native who grew up in a family of Jayhawks, Goff got his start in college athletics at KU in the Williams Educational Fund as an undergraduate. Following his ascension to a fulltime role in the department, Goff was hired at Tulane, where he also received his Masters of Business Administration.

During his time in New Orleans, he was part of the team that rebuilt the athletics program following the devastating impact of Hurricane Katrina. His more than eight year tenure was highlighted by his role as Associate Athletic Director for External Affairs where he was responsible for leading the $70 million athletics fundraising campaign to raise funds to develop an on-campus football stadium. He also held oversight of marketing, ticket sales and operations, sponsorships and communications, and served on the department’s executive staff.

Following his successful stay at Tulane, Goff accepted the position of Deputy Athletic Director for Development at Northwestern. In 2016, he added Assistant Vice President to his title.

As part of his role at Northwestern, Goff has been responsible for unprecedented fundraising success as he led all Athletics & Recreation’s development efforts. During his time in Evanston, $460 million was raised to support the department. Throughout his tenure, annual fundraising efforts increased from an average of $6-8 million per year to an average of more than $60 million annually. The department set a university record, raising $97 million in one year alone.

On top of the fundraising efforts he led for the Wildcats, Goff served as the sports administrator for the football, volleyball and baseball programs. He also served on the leadership team for the university’s Alumni Relations and Development staff as an Assistant Vice President. That dual role required consistent engagement across the institution, and led to unmatched collaboration and efficiency with campus partners.

Goff’s leadership in record-setting fundraising created a dramatic transformation of Wildcats facilities during his tenure. In 2018, Northwestern unveiled a $270 million project alongside Lake Michigan, including the 100,000 square-foot Ryan Fieldhouse.  an indoor practice space that has supported the preparation of all 19 Wildcats varsity programs and hosted competition for lacrosse and soccer, and Walter Athletics Center, the new hub of the student-athlete experience including state-of-the-art developmental amenities for academic, sports medicine, athletic training, nutrition, professional development and sports performance support.

He also led the fundraising effort for the $110 million renovation of Welsh-Ryan Arena, the competitive home of Wildcats men’s and women’s basketball, volleyball and wrestling. Alongside the arena, Northwestern opened the $25 million Trienens Performance Center, a new dedicated basketball and volleyball practice facility, and indoor training center for baseball and softball.

Goff, who received his Kansas degree in journalism and sociology, is married to the former Nancy Kockott, a 2005 Tulane alumna (MBA 2008) and former tennis standout for the Green Wave. Together they have two daughters, Ellie and Carly, and a son, Graham.

“Kansas has made an exceptional hire in Travis Goff as its next Athletics Director. Travis is an extraordinary leader that was involved as a decision maker in all areas at Northwestern. He is a servant leader who will work tirelessly for all Jayhawk student-athletes, coaches, administrators, alumni, and fans. His vision, work ethic and high intellect will serve Kansas well. I wish Travis, Nancy and their amazing family all the best as they go home to embark on this new chapter.”

“The University of Kansas is getting an outstanding leader in Travis Goff. His work, along with the efforts of the team he built from scratch upon arrival, has helped transform the daily lives of all Northwestern student-athletes now and for generations to come. The future for all Wildcats is brighter because of his decade of impact in Evanston, and we all are thrilled for his opportunity to return home and lead in Lawrence.”

“When you grow up in Dodge City like Travis and I did, you get to know everyone. I have been fortunate to know Travis and his first-class family for more than 30 years, and it is so exciting to see him become the Athletics Director at Kansas. As both of us have evolved in college athletics, we have become great friends. I have always known this day would come for Travis at the right time and the right place. Travis has developed a sterling reputation in college athletics. He represents a new era in leadership as we modernize the collegiate model. The University of Kansas has hit a home run by hiring Travis as its new Athletics Director. I could not be more proud to call Travis a lifelong friend, and now fellow AD. Congratulations to Travis, his wife, Nancy, and their children, Ellie, Carly and Graham, on returning home to Kansas.”