The Start of a New Era

As we head into a new season of KU football and I kick off my final year, things are different here at the University of Kansas. We have young players on the rise, a new coaching staff, and winning on our minds.

Things have changed for the better ever since the new coaching staff came in.

They’ve given us structure, leadership, and, quite frankly, a standard of excellence we didn’t quite have before. It’s been a joy working with and learning from Coach Leipold and his staff.

I pride myself on being a good leader and setting an example the rest of the team can follow, and it feels great to have a coaching staff that perfectly aligns with my values.

I’ve been developing my core values and beliefs since I was five years old, playing Pee Wee Football and growing up in Goodlow, Texas.

A place so small that the total population is a mere 200 people.

Being from such a small town, it’s easy to get overlooked, to be ignored, and to get lost in the shuffle. That’s not my style, though. I refused to be ignored.

I had the mindset to work hard and show everyone what I could do on the field and in the classroom. I was a top athlete in both basketball and football, but recruiters simply didn’t come to see us play. The result — no offers anywhere.

It didn’t discourage me though; it only made me work harder.

I ended up walking on and playing JUCO football at Blinn College. It was the toughest thing I ever had to do. To walk on, fight for a spot, and prove my worth — man, it wasn’t easy.

I came in as a wide receiver but realized that I’d be better suited as a defensive back. I took it upon myself to tell the coach and do what’s best for the team. I moved to DB and played well enough to get an offer to KU.

The rest, as they say, is history. 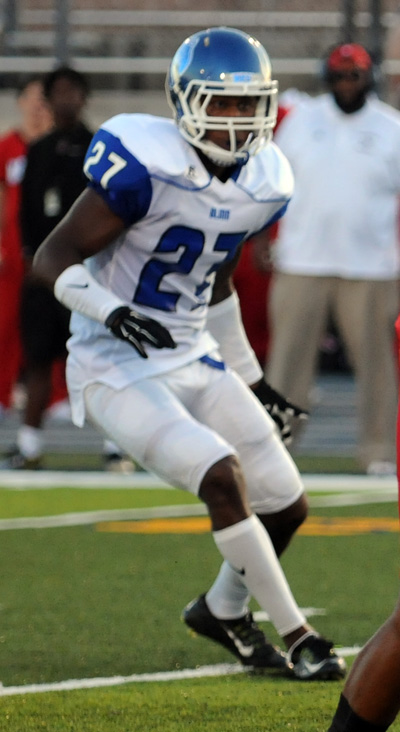 Being part of the University of Kansas is unlike anything else. The support from the coaching staff, teachers, and students is unmatched. You get so much love being a Jayhawk that it really feels like a family that just wants to see you do well on and off the field.

Running onto the field with thousands in the stands gives you the kind of adrenaline most can only dream of. You put on that helmet, and you just want to give your all for the team and the school, you know?

You remember what it took to get here, how hard you worked, and you just want to put it all on the line.

And that’s what I’ve done for every game at KU, man.

I gave you everything I have and tried to lead this team on and off the field. We may have fallen short in the win-loss column, but we are now in a new era, and I’m certain with our new coaching staff, you’re going to see a different KU this year.

That’s what inspired me to come back as a sixth-year super senior.

I want to see this through. I want to put on that KU jersey one more time. I want to win football games and help lead this team into the Coach Leipold era.

I didn’t come back for a last dance — I came back to turn KU into a winning program. To help establish the culture and shoot for a bowl game.

That’s what we will do if we stay on this course. We will be bowl-bound. I’ve been playing football all my life. I know a winning team when I see one, and this is a winning team. I knew this team was special when we pushed Texas Tech to the limit last season. We didn’t win the game, but we showed that we belonged.

And this year, we are not just going to belong. We want more!

As I enter my Swan Song as a Jayhawk, the start of the season is bittersweet. I’m excited because the future of KU football is bright, but I’m sad because my time here is coming to a close.

We all know football is temporary, but you’re never really ready for the end. Honestly, I’m not ready for it to end either.

But today, I’m just focused on the year in front of me. Everything else is still way down the road.

Regardless of what happens this year or what I do after my collegiate career is over, I’ll always be a Jayhawk.

Being a member of this team, a member of this university, has been the privilege of a lifetime, and I hope you see those feelings on every snap, every play, and after every defensive stop this season.

The temperature is dropping, the days will soon become shorter, and Saturdays in Kansas are about to be as exciting as they have ever been.

Come join the rest of KU, Coach Leipold, and myself as we experience it together this season.